The brief was to design a mobile living space powered by humans. The solution was a large cube on the back of a tricycle. Get It Louder 2012, a visual art and design exhibition at Beijing's fashionable Sanlitun Village shopping centre, organised the competition and awarded first place to the two-metre wide Bao House, built by the young local practice dot Architects. This might look like a big square of soft cushioning, but it is in fact formed from spray polyurethane foam (SPF), which the architects then injected into a mould of timber and textile. 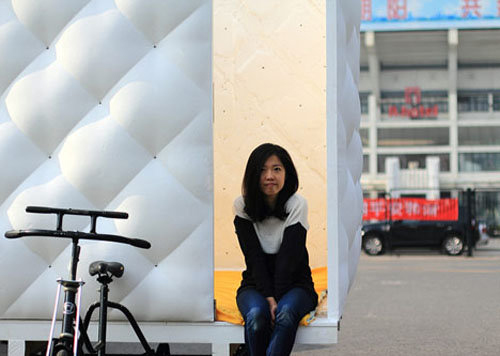 "SPF is normally concealed behind the finishing surface and functions only as a supplementary material," says principal designer Ning Duo, "Bao House tries to explore this common material and reinterpret it in a new fabrication system."

The bubble effect was created by the foam, which expands as it solidifies. The end result is water-resistant and thermally heated. And that same bubble effect gave the structure its name - "bao" is the Chinese word for "bulge". 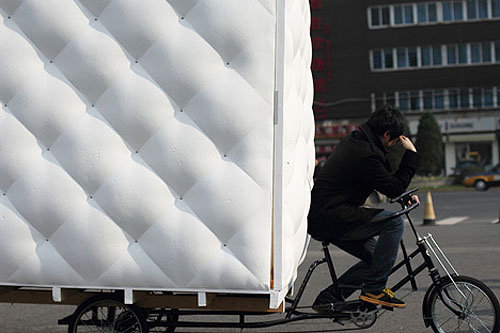 There are no side windows, but light is let in via the transparent polycarbonate roof. And there's no door as such, but one of the walls slides open. Inside there's just enough room to put down three mattresses.

Living quarters may be cramped in some of China's more built up conurbations, but even there to call Bao House a "living space" may be stretching it a bit. Perhaps it is better to view it as an ingenious, muscle-powered mobile napping unit.

For more inventive, ecological design solutions, pick up a copy of our Vitamin Green, the definitive volume on contemporary sustainable design and architecture from around the world, currently on offer at only  £31.50.