What happens when you pair up a renowned science fiction writer with a civil engineer? In the case of Snow Crash author Neal Stephenson and Professor Keith Hjelmstad of Arizona State University, the answer is a 20km-tall building that could be a launch pad for space rockets. This would make it 24 times taller than the current tallest Supertall Skyscraper in the world, The 2,722 feet tall Burj Khalifa.

The two found themselves joining forces as part of the Project Hieroglyph, whose headquarters are at ASU’s Centre for Science and the Imagination (which sounds like a great place to study).

The project buddies up scientists with engineers “to imagine a near future radically changed by technological innovation”. And it's precisely this that led Stephenson to ponder: “how tall can we build something?”  His Tall Tower conversation has expanded to involve practitioners of aerospace engineering, sophisticated digital modelling and architectural design.

Basing their concept on construction materials that already exist, Stephenson and Professor Hjelmstad have calculated that in a windless environment, a steel-based building nearly twice as high as your average commercial plane flies would, in effect, be possible. 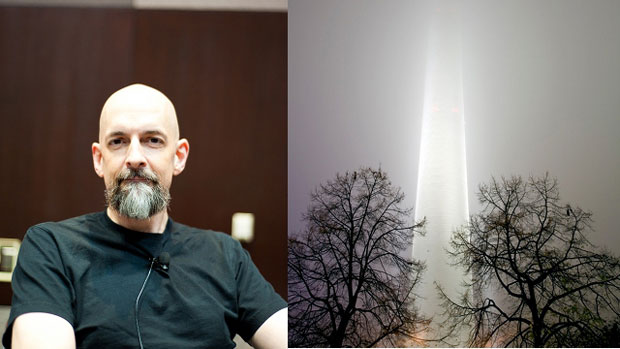 “In a windless environment making a structure that tall would almost be trivial,” explains Stephenson, who studied physics before switching to cyber-punk fiction. “But when you build something that is going to poke up through and get hit by the jet stream from time to time, then it becomes shockingly much more difficult.”

If the ‘challenges’ caused by wind pressure were dealt with, then this Tall Tower could be the most cost effective method of launching objects into outer space, claims Stephenson.

If you're a fan of lofty ideas in architectural and design thought you'll doubtless be interested in picking up a copy of our great book Vitamin Green which features over 100 buildings, landscapes and products nominated by an international roster of influential architects and designers and displays the incredible breadth of techniques, materials, and sites used by designers and architects today to address the big issue of sustainable design and architecture. You'll find it in the online store. If you're after a digital guide to architecture you need to download the Phaidon Architecture Travel Guide App.