Ever since the schemes of Leonardo da Vinci and more recently Buckminster Fuller, we’ve turned to architects and designers to imagine a better future for us, and to solve the problems of the present. Our book, Vitamin Green is an excellent survey of the schemes that have occupied recent thinking.

Currently the Chinese city of Shenzen has plenty of challenges - ones affecting it now and ones stored up for itself in the near future. Like many such conurbations, it suffers from a population that’s mushrooming out of control, increasing pollution and vast swathes of uncontrolled development.

Belgian-born, Paris-based architect Vincent Callebaut has attempted to tackle these issues with Asian Cairns, a masterplan featuring half a dozen sustainable ‘farmscrapers’ or horticultural towers. “The Asian Cairns project fights for the construction of an urban multifunctional, multicultural and ecological pole,” he says, “It is an obvious project to build a prototype of a green, dense, smart city connected by the TIC [information and communication technologies] and eco-designed from biotechnologies!” 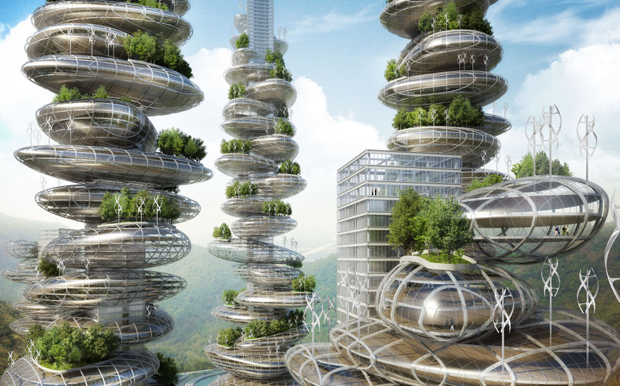 Callebaut and his team have a penchant for flights of fancy, such as their scheme for 1000 passive houses in Haiti and their high-end tower block for Taipei, Agora Garden.

This time, the firm has drawn inspiration for its design from cairns, those small piles of stones hikers like to make to mark mountain trails. Each ‘pebble’ is formed of steel rings and represents an ‘eco quarter’ with hanging gardens. These quarters are held in place by the building’s central spinal column. Meanwhile, peaking out of each tower’s summit is a conventional-looking block, presumably where the planned apartments and offices will be. And perched on the pebbles’ ledges wind turbines will sprout, making their contribution to the ‘farmscrapers’’ eco credentials. 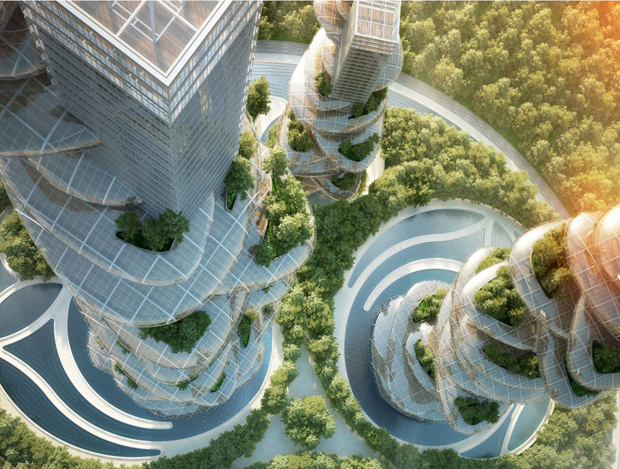 It looks fantastic, and sounds fantastical. But the architects remain convinced of their wisdom (as indicated by their prolific use of exclamation marks): “The Asian Cairns project synthesises our architectural philosophy that transforms cities into ecosystems, quarters into forests and buildings into mature trees, changing thus each constraint into opportunity and each waste into renewable natural resources!”

Now, we imagine, it’s just a matter of a similarly visionary client to put up the money.