Could you live in a house made from cow's blood?

A slaughtered cow can produce around eight gallons of blood. That's a lot of black pudding or, if you're architect Jack Munro, a few new bricks. "Animal blood is one of the most prolific waste materials in the world," says Munro, a University of Westminster graduate. He's been researching the use of animal blood as an alternative construction material in areas short of other raw materials.

Munro gathered waste blood from four different slaughtered cows, added an antibacterial ingredient to the sanguine solution and mixed it with sand. He poured this bloody concrete into a frame and baked it at the relatively low temperature of 160 degrees. After just one hour of baking, Munro discovered that the blood proteins had hardened with the sand, to form a strong, insoluble material, which could, perhaps, be used in construction. While the graduate's bricks are yet to prove very strong, they are at least waterproof, which is good news for places suffering from heavy erosion. 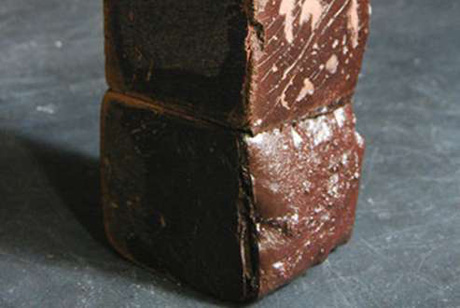 Now, as part of his Sanguis et Pulvis project, Munro is attempting to turn his research into reality with the Egyptian community of Siwa. The intention is to raise enough funds for a prototype single-storey dwelling there, made of Munro's blood bricks.

Sounds ghoulish? Well, plenty of British farmers used to add cattle blood to their whitewash when coating farmhouses, and, if people can get their head around using energy generated by human cremations, (Durham Crematorium is reportedly giving this a try), then they might just be able to stomach Munro's concept. If you're intrigued by this distinctly red solution to a green architecture challenge, you'll probably be interested in a great new book on sustainable design and architecture Vitamin Green worth 450 points when you join Phaidon Club.