KAW create a fortress for women

The architects say Veilige Veste is the first large office block in the Netherlands to be renovated according to the 'Passive House' standard. Passive House’is a standard for energy efficiency in a building, reducing its ecological footprint.The fact that the former police stations’ substructure was placed outside the building, meant that it created a thermal bridge of sorts, working like a tunnel sucking in the cold outside air.

By wrapping the building with the diamond panels, the substructure is now contained within the building which is covered by a thick layer of insulation - in places over 3 feet thick. In a nice touch, rooms on the second floor surround a roof terrace offering a protected outdoor space that the women can enjoy without having to leave the safety of the building. More examples of great and good green design like this in our book Vitamin Green. 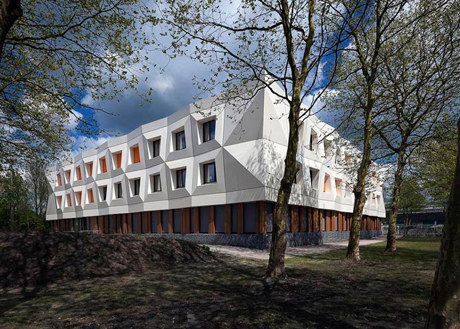