According to UN estimates, nearly one billion people live in urban slums. Therefore solving the challenge of cheap and dense city living remains a difficult task for architects and planners. One solution has been put forward by the British design practice, Studio Bednarski to create 500 low-cost, low-rise houses in a Nairobi slum, each with a street-facing "dollar room'" which could be rented out or used for a business, so that the homeowners can borrow and pay off mortgages. Meanwhile, the Indian architecture firm Mandviwala Qutub & Associates reached for the sky in its solution to Bhendi Bazaar, a run-down pocket of Mumbai's old city centre.

Bhendi is not a slum exactly, though it's certainly in need of redevelopment. The Mumbai-based practice has suggested replacing the 16-acre area of poor sanitation, struggling infrastructure and crumbling, century-old uninhabitable buildings with a tight cluster of towers, turning the district into a high-rise 'green haven'.

By building up, the intention is to provide better apartments with parking, wider roadways, 50% more open spaces, amenities, retail and community courtyards; in place of the original bazaar, a wide pedestrianised boulevard would run from north to south.

While the images look impressive, it's difficult to see how the hustle and bustle of bazaar street life might translate into such a Manhattan-style cluster of skyscrapers. Is a move upwards a step in the right direction? Check out Vitamin Green for more innovative ideas and solutions around sustainable architecture and design. 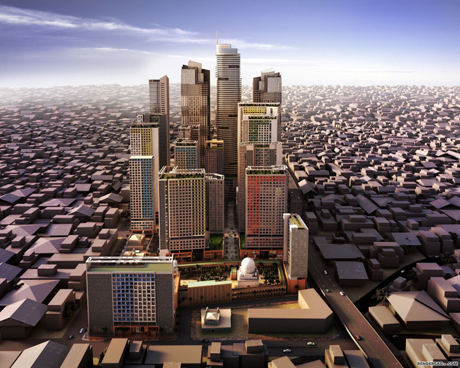