It sometimes seems as if the UAE has it all sewn up when it comes to artificial land masses. Dubai’s Palm Islands, after all, will be the biggest man-made islands in the world. But the Nordic nations have been at it for years – it must have something to do with all those fjords and archipelagos, making land feel readily accessible wherever you are on the mainland.

Now Copenhagen’s Planning Department is considering adding to the capital’s long history of artificial islands with a handful of new ones. To this end, it has commissioned a couple of Danish architecture firms to imagine what five more could look like. The practices, Tredje Natur and PK3, have come up with a  'Blue Plan'. 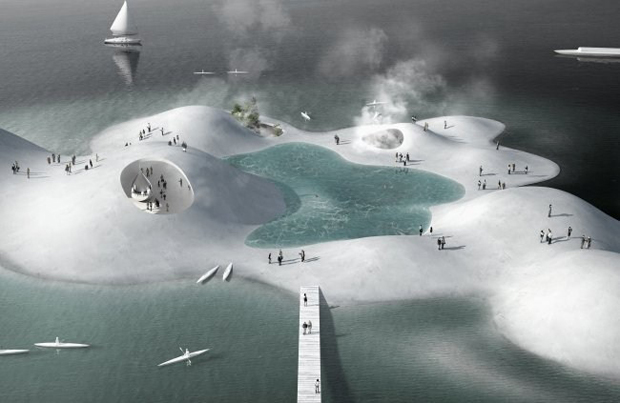 Their idea is to convert the harbour and the waters nearby into a recreational area with a bit of education thrown in, appealing – they hope – to locals and visitors alike. The Plan comprises the House of Water, Bird Island, Krøyer’s Puddle, Operaparken and Sportsøen. Probably the most visually arresting is the House of Water, which is all curvy concrete, with pools formed in the generous dips. According to Flemming Rafn Thomsen and Ole Schrøder of Tredje Natur:

“The harbour bath is now so clean that the tourists and citizens of the city can both bathe and fish here - a privilege only a few large harbour cities in the world share.” This zone would be attached to the land via a traditional wooden jetty.

Fugleøen, or Bird Island, will be a ‘natural habitat’ to attract birds, insects and small animal life. The architects see this one as “the obvious destination for bird lovers, angling enthusiasts, shell collectors, biologists and school classes to be taught biology, history and geography”. 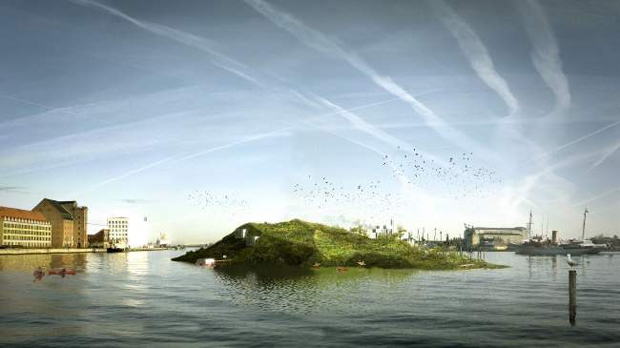 It would be easy to imagine long queues forming for Krøyer’s Puddle, with its steamy sauna caves buried in the hillocks, and heated pools. Operaparken is intended as a temporary park area in front of the Royal Opera House, from where performances will be projected for park-goers. Water sports including scuba diving, swimming and kayaking will take place on Sportsøen, positioned in the middle of the harbour.

For the architects, their Blue Plan promises health and well-being. “Research shows that there is a clear connection between the physical activity level of humans and the experienced accessibility to nature – the easier the experienced accessibility to nature is, the bigger desire for physical activity. Other research indicates that stays in nature have a positive influence on the mental health of humans and on the reduction of stress.” The two firms are now conducting an urban analysis, to see if their healthy dream might actually get the go ahead and be built. You'll find more of this kind of stuff in the very wonderful Vitamin Green.