Deep in the Wisconsin woods is a deceptively slight and simple hide-away. Rather than your usual log-type cabin, this weekend retreat in Muscoda burrows right into the landscape and rises in an L-shape, all glazing and anodised metal panelling. Called the Stacked Cabin, it’s the creation of Milwaukee- based Johnsen Schmaling. Founded by Chicago-born Brian Johnsen and Berliner Sebastian Schmaing, the mostly residential practice is seen as on the up, with an Emerging Voices Award from the Architectural League of New York under its belt. It was also listed by Architectural Record as one of ten emerging global studios in its 2011 Design Vanguard issue. 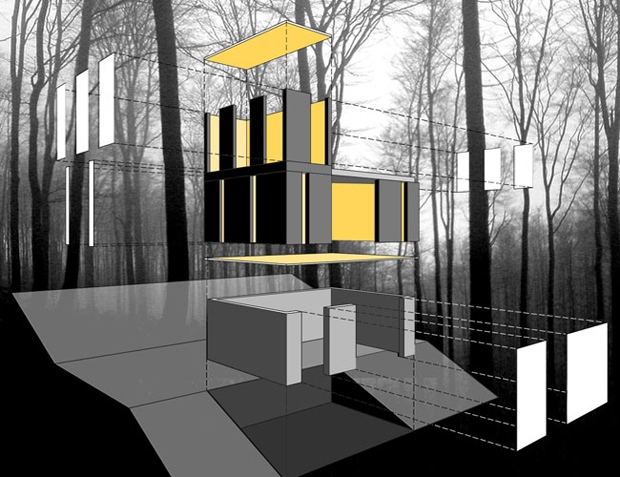 "A young couple from Chicago wanted a weekend getaway in the Wisconsin woods, but their budget was “aggressively small,” says Sebastian Schmaling, of the Milwaukee-based practice. "A traditional cabin with inflexible private rooms surrounding large, common spaces was therefore not an option. The clients and the architects were also conscious of minimising the footprint in the rural setting. The architects stacked the functional spaces to create a house that looks like a three-dimensional L lying on its spine. By carving into the slope of a hill, they could place a garage and bathroom in a concrete base, where cedar, for entry and garage doors, adds warmth."