It's pretty much impossible to pick a favourite project from the many in Vitamin Green, our book on sustainable architecture and design projects around the world. However, one of the most unusual is the Colina de Deportes Arena in Spain.

It's in a new district on the outskirts of Toledo, and integrates 2,000 units of social housing with the native landscape, particularly the oleander bushes of the area. It sprang from a collaboration between Swedish architect Mia Hägg, the founder of Habiter Autrement, and Ateliers Jean Nouvel for whom she once worked.

So it was amid some excitement that we noticed Nouvel and Mia Hägg had collaborated once again, this time on a project in the current Venice Architecture Biennale. 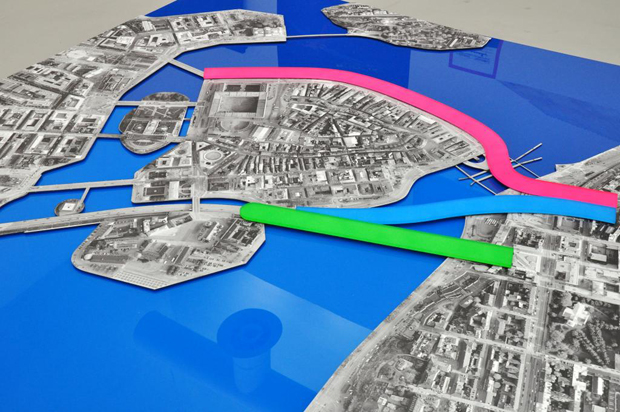 It's called "Meeting Lines” and is their project for the Slussen Masterplan competition - an ambitious urban design that seeks to regenerate Stockholm's transport infrastructure and utilise the city's bridges in an effort to create a more people-friendly, less car-focussed, urban environment.

The project proposes three unique and separate public spaces, designed as 'living links' for the city. It's inspired, in part, by the public infrastructure of the Rialto Bridge in Venice. You can get a good idea of it in the picture above. In a video interview with archdaily.com Nouvel explained the project with relation to the theme of this year's Biennale as defined by curator David Chipperfield - that of Common Ground.

"With the development of progress in the 20th century lot of bunds arrived in the city with cars, highways. The spaces were very negative for the city. I saw the possibility to create new shared common space, common ground. If you cover the space on the water, the space becomes common ground and, with the topology of that, the meeting line."

Nouvel first proposed his concept of 'the meeting line' in his plans for Berlin following the fall of the wall. His proposal, One Of Us, responded to the call for ideas put out by the Frankfurter Allgemeine newspaper in 1990 by coming up with the notion, as he described it at the time "of reversal, turning round the wall, the no man’s land, the no go zone by creating lively, permanent and distinct 'meeting lines'."

Nouvel believes the same approach is possible in Stockholm. "Stockholm is built on an archipelago, the bridges are a real question. If you create something and link it to a new function for the city this could be the common ground in the city. It could be a lot of pleasure," he says. Hägg meanwhile, a former resident of the city, puts the scheme into a little more social context.

"This space in the centre of Stockholm connecting the two main islands  Gamla Stan with Södermalm has been, since the 1930s, a controversial area. (It's) a 100 by 100 square metres traffic hub which has made it impossible for pedestrians to cross from one space to another. It has become a non-space."

Hägg created a collage image of the traffic hub and surrounding area and pasted it onto other historic city centres (including Paris and Venice) in an effort to visualise the scale of the challenge. She also consulted historical plans. 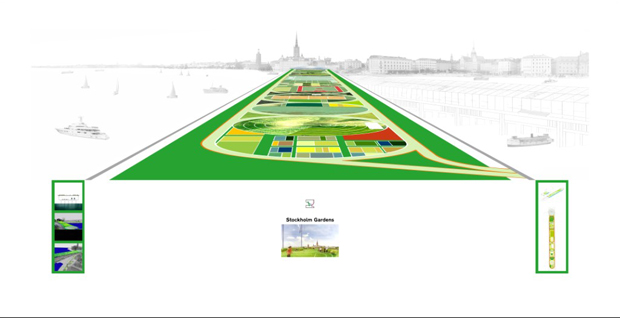 "Initially the link between the islands was a thin one,'s she says. "Our belief, our conviction, is that urbanism today is all about addition, about how can we transform something that is already there and perhaps problematic and negative into a positive without demolishing or starting again on a kind of a tabula rasa concept. And so on the existing lock we build a kind of contemporary version of a  Rialto or Ponte Vecchio - an inhabited bridge with shops, restaurants, cafes etc: these become living links in the city."

Hägg's architectural practice Habiter Autrement, has offices in Paris and Locarno. Its work is characterised by its attention to the site of a project, the practice looks to reveal and direct the forces that are already present when its architects begin their research. This can include design moves that refer to an area’s history, reveal a geographical context, or expose a particular quality of light.

You can find more about the work of this increasingly interesting architecture practice in Vitamin Green. As well as the Colina de Deportes project, Habiter Autrement's Stockholm Energy Systems, a pavilion commissioned in 2009, is also covered in depth. Incidentally, the book is worth 450 points towards your next purchase when you join Phaidon Club. 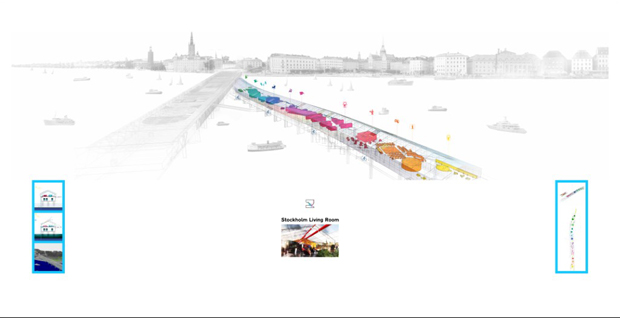