Would you live in Softkill's house?

Think Softkill studio's Protohouse looks a like a sheep's skull? Don't be alarmed. The London-based designers aren't – at least, to our knowledge – a coven of architectural Satanists. Instead, they've made this model home using an algorithm which mimics the way bones grow in animals' bodies.

The Protohouse, produced on 1:33 scale, which was a hit at the recent 3D Printshow expo, employs a method of desktop fabrication called selective laser sintering, whereby a laser fuses tiny particles together. This has allowed Softkill to produce 31 spindly pieces of bone-like plastic, which they say can be clicked together to form their slightly spooky cantilevered house. 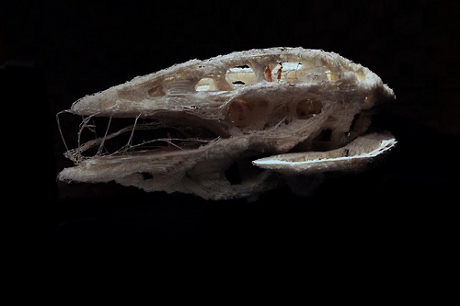 In an interview with Dezeen, Softkill's' Aaron Silver explains that the pieces are sufficiently small so that, once scaled up, they could be transported to the building site on the back of a flatbed truck. Silver also outlines why their bone-growth model came out of engineering necessity, rather than with a spooky fascination with skeletons. “We created an algorithm that mimics bone growth so really we are depositing material only where it is most necessary and most structurally efficient.

Though Softkill have no plans to build a full-size Protohouse, they are keen to make larger models, with a view to their designs finding a place within our built environment. For more on the project go here, and for further progressive, environmentally consciousness design treatments, consider Vitamin Green, the definitive book on contemporary sustainable design and architecture from around the world.