Few of us can remember a time before modernism, yet the Chinese American architect I.M. Pei, who died yesterday aged 102, played an active part in the 20th century struggle against the fusty Beaux-Arts style of building, still popular when he was training.

A disciple of Le Corbusier’s International Style, Pei’s buildings serve as a testament to the enduring appeal of modernist architecture. In honour of his passing, here are five of his absolute best examples. 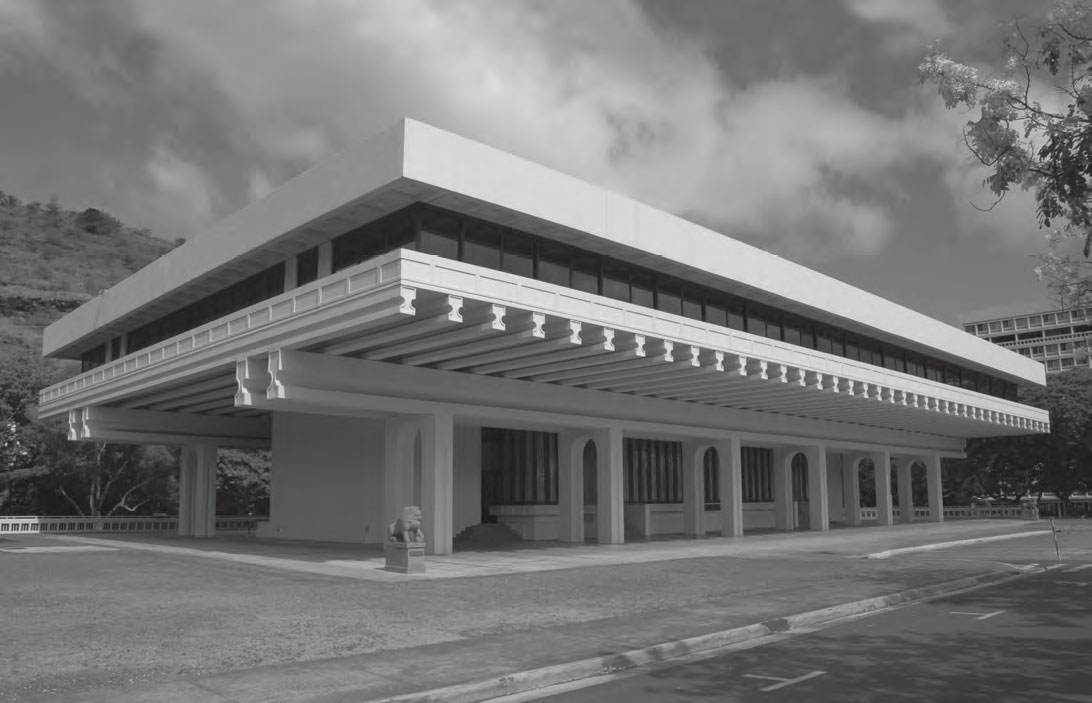 Jefferson Hall, East-West Center, Honolulu, Hawaii This 1963 building was one of a handful commissioned from Pei by the US government, who viewed the East-West Center, in the centre of the Pacific as "a meeting place for the intellectuals of the East and the West,” explains Phaidon contributor and photographer Darren Bradley in this blog post.

“Chinese-American architect I.M. Pei was tapped to design the core buildings of the new campus on the eastern edge of the university grounds,” Bradley writes. “Pei was already coming into his own as a brilliant architect, after designing a number of buildings in Atlanta, Denver, and was also designing the new L'Enfant Plaza in DC at the time. Of course, the symbolism of having a Chinese-American architect design the buildings of the East-West Center was probably not lost on anybody.”

The residential blocks were heavily influenced by Le Corbusier’s Unité d'Habitation designs; (Pei was such a Corbu fan he even wore glasses similar to those favoured by the Swiss-French architect). However, the Hawaiian climate allowed Pei a little more freedom, prompting him to include outdoor communal kitchens for Honolulu students, offering them good ventilation, and even better views of the surrounding hills. 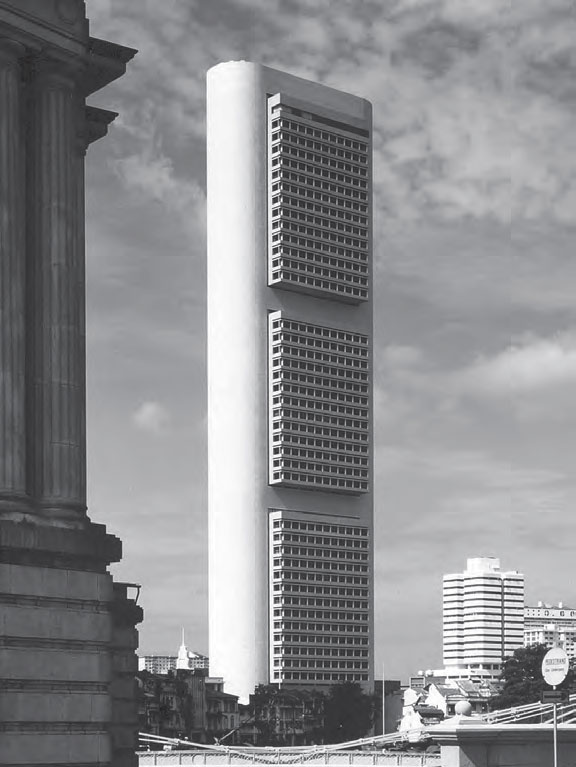 These works have been moved elsewhere, however the OCBC still occupies the building, which locals have nicknamed the calculator - thanks to its button-grid-like windows - and remains incredibly well suited to retail banking.

“Floors, counters and some of the wall surfaces are clad in granite and marble, while the acoustic level in the main hall is modulated by the largest seamless carpet in Singapore and a ceiling defined by 36 huge coffers,” explain the editors of 20th Century World Architecture. “Below the hall is an underground strong room and a network of vaults.” 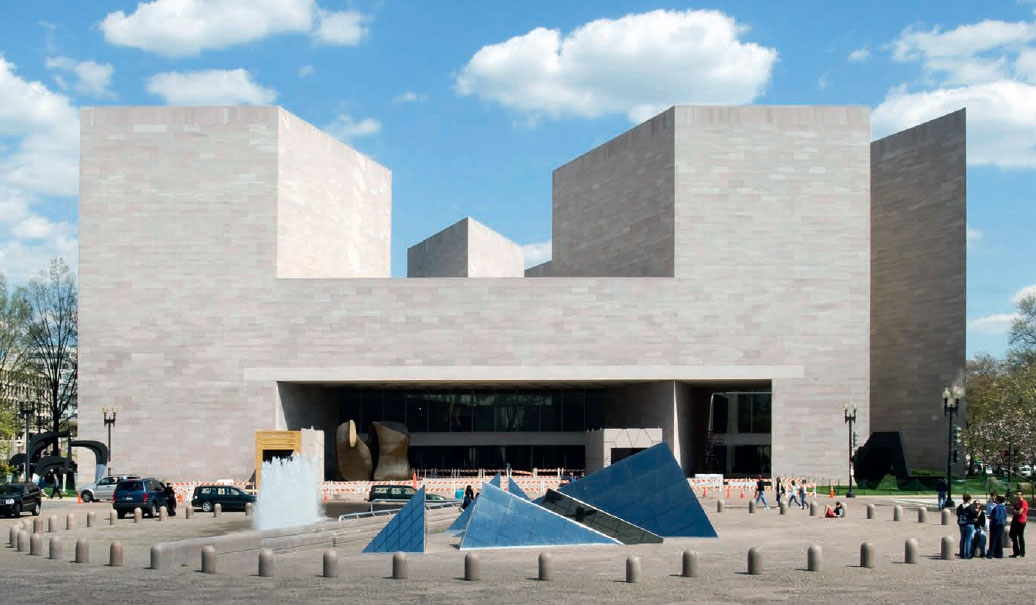 East Building, National Gallery of Art, Washington, DC This 1978 creation on the National Mall might be paired with a more conservative neoclassical building, yet Pei’s designs work through ideas that he would later develop more in the French capital, beside another national museum...

“The composition of this post-tensioned concrete structure has a sharp geometry defined by the interlocking interplay of two triangles,” explains 20th Century World Architecture The Phaidon Atlas. Inside the gallery block an atrium is dramatically lit by a cluster of 25 tetrahedral roof lights.” 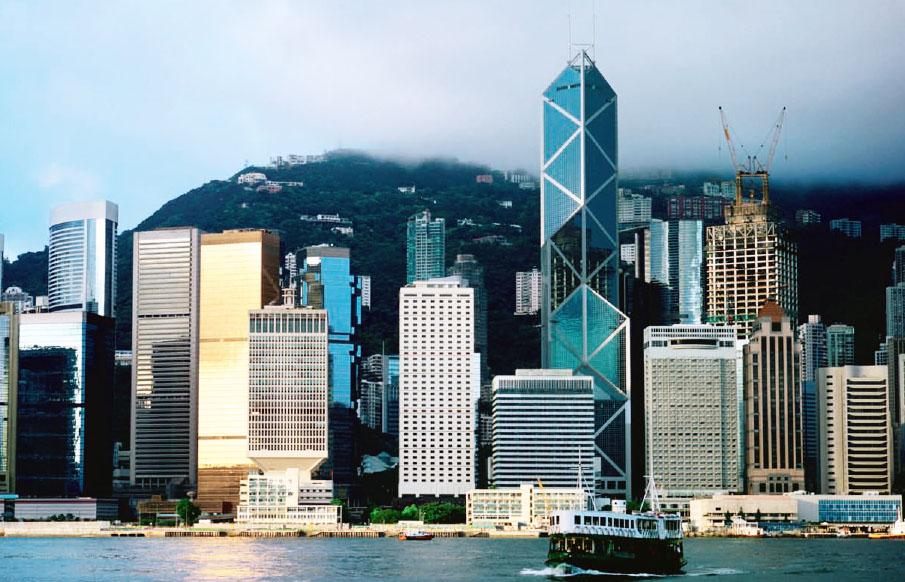 Bank of China Tower, Hong Kong Pei completed the building in 1989, prior to Hong Kong’s handover, and the building was conceived in part to symbolise the transfer of Hong Kong from British sovereignty back to Chinese ownership.

“The prism-like structure, with its facade of reflective glass mirroring the skyline, illustrates an interest in the expressive potential of pure geometries,” explains the text in 20th Century World Architecture. “Rising from a perfectly square plan, four quadrants each ascend to a different height and terminate in a sloped, triangular roof. This bundled form was inspired by the growth patterns of bamboo, a symbol of livelihood and prosperity in Chinese culture.

“The triangular, diamond-shaped bracing that rises up each of the four shafts distributes the tower’s load to four columns at the corners of the building and one in the centre. This innovative structural system, designed to withstand high-velocity typhoon winds, resulted in the use of 40 per cent less structural steel compared to other buildings of the same height and surface area.” 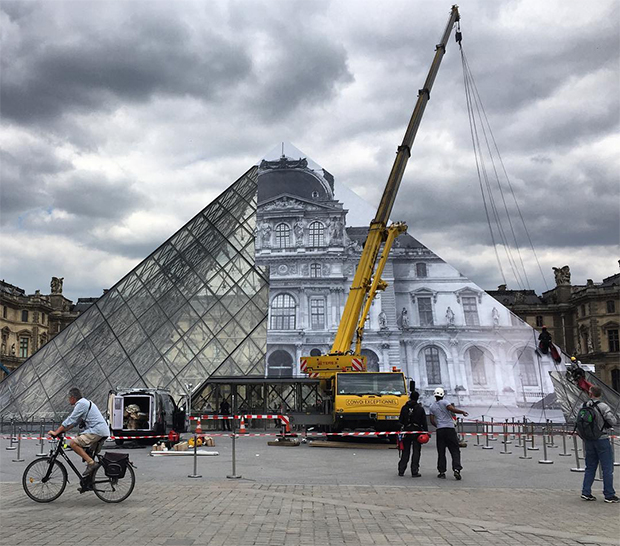 JR's work goes up on the Louvre Pyramid. Image courtesy of JR's Instagram

The Louvre Pyramid, Paris The French President Francois Mitterrand chose Pei personally to renovate the Louvre, which involved the construction of an underground hall beneath the Cour Napoleon and the construction of a 21.6 metres (71feet) tall glass and steel pyramid immediately above this new lobby.

Critics at the time dubbed the structure Pharaoh Francois's Pyramid, though since the structure has since found a loved place within the visual landscape of the city, since its completion in 1989. French artist and activist JR made the pyramid ‘disappear’, a few years ago, by pasting one of his signature photo installations over the structure, as part of a month-long series of events at the world’s largest museum. Meanwhile, the Louvre itself has taken a simplified illustration of Pei’s pyramid as the favicon for its site, louvre.fr. Few works of architecture can shrink down to a few pixels, as effectively as Pei’s.

For more insight into the work of this modern architecture legend get 20th-Century World Architecture The Phaidon Atlas. For more on Pei’s greatest influence, take a look at our Le Corbusier books; to see the brutal side of his work get This Brutal World; and to get a handle on Pei's place in the greater sweep of architectural history buy The Future of Architecture Since 1889.