Rem Koolhaas is to receive the 2012 Jencks Award. The award is awarded annually by The Royal Institution of British Architects (RIBA)to an individual or architectural practice that's made a major contribution internationally to both the theory and practice of architecture. The award will be presented to Rem Koolhaas on November 20 at RIBA in London.

Koolhaas's work has consciously worked to deepen and expand the connection between architecture and contemporary culture. All of his projects examine ways that architecture can engage with the contemporary city and the cultural context in which it operates.

He founded OMA (Office of Metropolitan Architecture) in Rotterdam in 1975 with Elia and Zoe Zenghelis and Madelon Vriesendorp, as a collaborative office practicing architecture and urbanism. He heads the work of both OMA and AMO (Architecture Media Organisation), the research branch of OMA, operating in areas beyond the realm of architecture such as media, politics, renewable energy and fashion.

His built works include the master plan for the Eurolille, a convention centre in Lille; a dance theatre in the Hague, the Kunsthal Museum in Rotterdam, the IIT student center in Chicago, the Dutch embassy in Berlin, the Seattle Public Library; Casa da Musica in Portugal, the Central China Television (CCTV) headquarters in Beijing, Maggie’s Centre in Glasgow and New Court, the new Rothschilds Bank in London. Both new UK buildings are on the 2012 RIBA Stirling Prize shortlist. 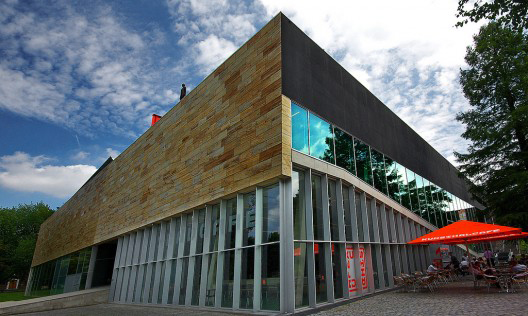 "Rem Koolhaas, more than any other architect of his generation, has built a parallel life between the theory and practice of architecture," says the Architectural theorist Charles Jencks. "This double commitment was explicitly marked in 1999 as his twin studios, OMA and AMO, the Office of Metropolitan Architecture and the Architecture Media Organisation. The former treats practical building, while the latter concentrates on cultural issues that arise with architecture. The separation of these Siamese twins enables us to liberate architectural thinking from architectural practice. Whatever the diagram, idea or formal invention, the theoretical part of Koolhaas keeps the constructive part on edge – vital, fascinating, maddening."