Architecture before and after the third Reich

Although an essential addition to any architect's library, including all the key data for over 750 of the greatest works of architecture built between 1990 and 1999, 20th Century World Architecture is a marvellous trove for the general reader. Featuring every type of construction, from cafes to government and university buildings, it spans every style and global region, expanding previous, Western-based ideas of the narrative of modern architecture, whose language is universal. 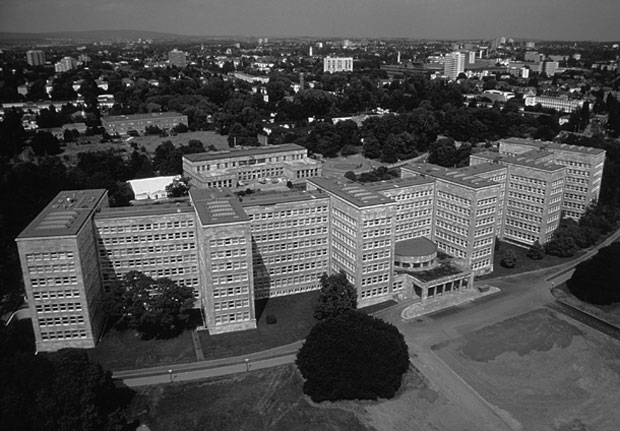 In the history of architecture, world affairs always lurk in the background. Take the section dedicated to Germany. On opposing pages we see buildings constructed before and after the Third Reich. On page 322, is the I.G. Farben Administration Building in Frankfurt am Main, completed in 1930 by Hans Poelzig. At the time, this was the largest office building in Europe. However, the building is not vertically imposing. The curvature of the buildings, its flat roofs, nine storey height and repetitive rows of windows are designed, as the text points out, “give the composition a horizontal emphasis”. We see this from various angles in the exterior shots – only the interior shots reveal the hidden, voluptuous grandeur of the building.

I.G. Farben came under the spotlight in the war trials following World War II due its role as the HQ for research projects conducted by the Nazi regime, including those into high explosives, synthetic oil and Zyklon B. Today, these premises are now part of the Goethe University campus.

On the opposing page, we see the Neckermann Mail Order Company Building, also in Frankfurt, completed in 1961 by Egon Eiermann. It, too, is discreetly yet impressively horizontal in emphasis, quietly functional in appearance – the difference being that, in advance of the Pompidou Centre, the service elements of the building – staircases, air conditioning ducts, etc- are located on the facade, so as to free up working space inside. These pages illustrate how quickly and effectively (West) Germany picked up the thread of its pre-war, modernist architectural traditions.

For greater insight into buldings around the world, take a look at The Phaidon Architecture Travel Guide App, which features 1,500 projects from 840 practices around the world. Also if you're interested in visiting Frankfurt, which is home to the two buildings we've written about above pick up a copy of our Wallpaper city guide before you go.