New show uncovers LA has it might have been

LA has never been a urbanite's dream city. Too spread out to generate the bustle of Barcelona, or the dizzying effects of New York's skyscrapers, it is often the city that cityfolk love to hate. We think it's a great place, but its interesting to see how different it might have been, had certain schemes got past the planning stage.

LA's Architecture and Design Museum's Never Built: Los Angeles (11 July – 15 September) draws together some of the wilder proposals, such as a huge glass dome for LAX airport, replete with palms and a viewing platform – a 1959 proposal by LA firm Pereira and Luckman – or Frank Lloyd Wright's 1925 Civic Civic Center Plan – which looks more at home within the reels of Fritz Lang's Metropolis, than below the tawny hills of Hollywood. 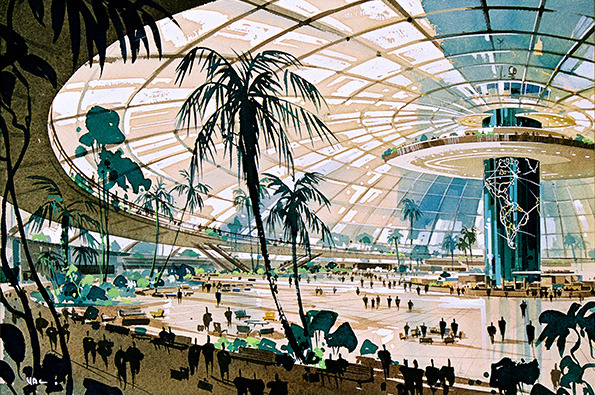 Other proposals, like Kelker and Deleuw's Subway Plan, also from 1925, makes you think of a city that might have been, and reveals a civic story that few outside of scholastic and architectural circles are aware of.

“It was an amazing treasure hunt,” co-curator Sam Lubell told Fast Co Design, “Most of these projects have never been seen by the vast majority of Angelenos. It will be an entire new history.”
Some were, quite rightly, consigned to the architect's drawer, while others feel as if they've been unduly overlooked. As the museum's own blurb puts it: “The projects beg the question: Why were they never built?”

To find out more, visit their site, and for more on successful, but by no means any less ambitious projects from days gone by, consider our 20th Century World architecture book, an overview of the finest built architecture from around the world completed between 1900 and 1999.