It’s a common complaint – your papers are scattered all over the place, and it’s high time they were put in order in one easy-to-access place. Germany’s Folkwang University of the Arts in North Rhine Westphalia has found itself in a similar situation, and so commissioned itself a brand new building fit for the purpose.

Folkwang Library – which was inaugurated in September - is to house around 190,000 treasures of sheet music, sound recordings, images, books and other media, that up till now have been squirreled away in innumerable archives around the Ruhr.

In fact musicological gems from three bodies – Folkwang University, the former library of musicology at The Ruhr-University Bochum as well as the music education department of University Duisberg-Essen – have been brought together. The new building is designed by Swiss architect Max Dudler, although he can’t take all the credit for its aesthetic impact. For the vast images at the windows were created by photographer Stefan Muller. 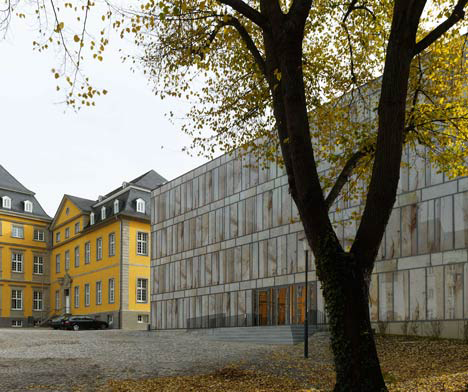 The site, in Essen, is at the university’s baroque Werden campus, much of which started life as an 8th century Benedictine monastery, and then, a millennium later, became a nobleman’s residence. The Dudler building makes up the fourth side of the original courtyard, which was the site of a military hospital until 1969, when it was demolished. Its foundations are still in place, and the design plays with this by growing very obviously out of the old stones. Dudler has also given his building a stepped entranceway, in homage to its immediate neighbours. 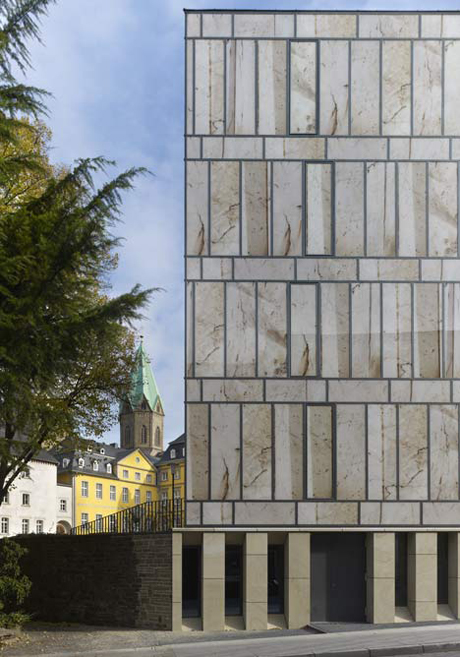 As for the marble-like façade, that’s a photographic trick conjured by Muller’s close-up shots of uncut stone in a nearby quarry. Twelve of these were blown up and placed behind the façade’s glass panels, as a reference to the 12 musical notes of a score.

This translucent parchment-cum-marble is back-lit at night, creating an uplifting effect for passing academics and aesthetes alike.

But there’s more to Muller’s snaps than looks. Inside, the main draw is a triple-height reading room, the prized contents of which are protected by the exterior shell. For more examples of innovative architecture check out 20th Century World Architecture, the beautiful Concrete and the illuminating Understanding Architecture, all of which would make someone very happy this Christmas. 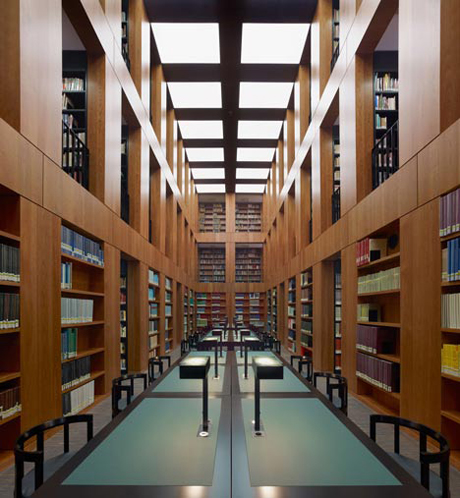