With the political row over a proposed third runway at Heathrow Airport dominating UK news at the moment amidst heated debates over the need for increased air capacity, global architecture practice Gensler has stepped into the fray with its proposals for a floating airport in the Thames Estuary.

Gensler says that it's plan would be faster and cheaper to build than any other solution currently proposed and claims London Britannia Airport (LBA) could provide the UK with its first 24/7 airport within the next decade, positioning the capital as the global gateway for Europe in what would be the world’s most innovative infrastructure.

The proposals are unique in that they also envisage a new future for the existing airport Heathrow as the largest urban expansion project in Europe with the development of an eco city – Heathrow Gardens - on the former airfield utilising existing infrastructure to provide additional homes for 300,000 people and employment for over 200,000.

Gensler was the project architect on the recently renovated and fantastically well-received Terminal 2 at San Francisco International Airport, opened by Sir Richard Branson in April 2011. It also designed Detroit airport and has drawn up radical plans for Denver and Seoul airports.

Chris Johnson, Gensler managing principal and the creative director for the airport said: “This is a once in a century project that will build on the capital’s reputation for innovation and creativity and provide a new symbol of national pride. This is a fantastic opportunity to rethink the problems created by a redundant 20th century airport model and provide a genuine 21st century airport that creates a new standard for the world, minimising nuisance and maximising environmental benefits.” 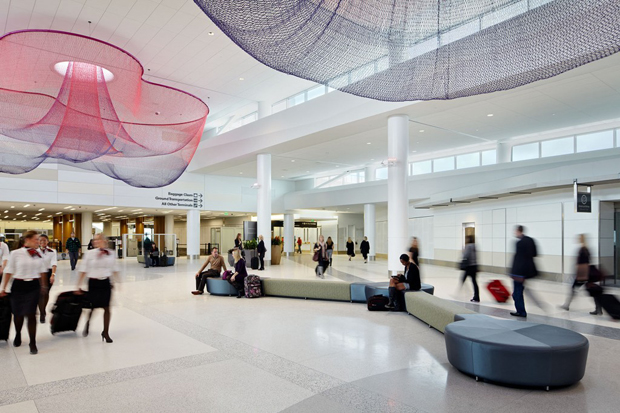 Ian Mulcahey, Project Director adds: “This will be a ‘national’ infrastructure project that can inject new pace and dynamism into our economy. The airport can be quickly manufactured in the ship yards and steel works across the UK and can be floated by sea and positioned in the Estuary. This isn’t a London Airport, it is a Global Airport, designed, manufactured and built in the UK.”

Gensler says the marine location not only minimises noise disruption to existing communities whilst enabling 24 hour passenger arrival and departure, but also avoids any demolition of homes. The plan includes four five-kilometre floating runways. To minimise environmental disruption the runways are tethered to the sea bed and to the final departure concourse which provides access to the marine rail tunnels connecting directly to central London and the European High Speed Rail Networks.

The design’s inherent flexibility creates a platform whereby runways can be floated in as required and taken away for maintenance in the future. The concept allows for future expansion to accommodate 6 runways when required. The architects say that floating the runway and its associated hard standing it is possible to avoid the negative effects of land reclamation in the sensitive estuarine waters of the Thames. The location of the airport can then be optimised to avoid the key feeding and migration areas between high and low water.

London Britannia would have a sustainable access strategy with unparalleled accessibility to the UK and Europe through a combination of rail, ferry and jetfoil connections. Vehicular access will be dispersed to three new land based Departure/Arrival terminals, two located north and south of the estuary, and a third Central London terminal proposed between Canary Wharf and the Olympic Park. The airport has also been designed to generate much of its own power from marine turbines situated within, and adjacent to the floating runways.

The plans are as ambitious as they are timely. Business leaders and some Tory MPs argue that increased airport capacity is vital to dragging the UK out of recession. Chancellor George Osborne, has hinted at a rethink over a third runway at Heathrow and the controversy intensified in recent days after Justine Greening, a fierce opponent of a new Heathrow runway, was replaced as transport secretary by Patrick McLoughlin. If, like us you're a bit of an airport design junkie you'll find plenty to pore over in the two books at the top of the column on the right.