Following on from its redesign of 425 Park Ave, Foster + Partners has just released the plans for an even more dramatic re-imagining one of New York’s most iconic buildings - Grand Central Station. Foster was one of three architects at the Municipal Art Summit for New York 2012 yesterday, presenting potential re-workings of the station which celebrates its centenary in February.

Foster + Partners' experience with transit hubs in all their forms -  airports, subway stations and even a spaceport - makes the practice best-placed to reinvigorate the iconic station, originally designed to cater to the needs of 75,000 people a day, but which in reality, handles 10 times that figure, occasionally peaking at close to a million.

The plans see the architects increasing accessibility and mobility by widening concourses, improving entrances, enlarging public spaces, and reconfiguring streets in favour of pedestrian traffic - what it calls bringing “clarity back to Grand Central Terminal.” Externally, streets will be reconfigured as shared vehicle/pedestrian routes, and Vanderbilt Avenue fully pedestrianised. The proposal also creates new civic spaces "that will provide Grand Central with an appropriate urban setting for the next 100 years." 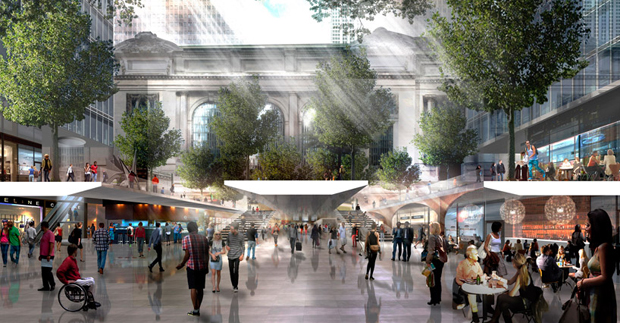 Lord Foster said: "The quality of a city’s public realm reflects the level of civic pride and has a direct impact on the quality of everyday life. With the advent of the Long Island Rail Road East Side Access, along with the plan to re-zone the district, there has never been a better opportunity to tackle the issues of public access and mobility around one of the greatest rail terminals in the world."