The White Guide Global Gastronomy Award is bestowed by Sweden's White restaurant guide to "a creative chef of international prominence, who is at the apex of his or her professional orbit and who has become an example and inspiration within and for contemporary gastronomy".

Over the past eight years the annual prize, which is sometimes described as a Nobel Prize for gastronomy, has gone to chefs who have developed strange new cuisines - Ferran Adrià in 2007; René Redzepi in 2010; and David Chang in 2012 - rather than those that have laboured within the confines of existing national dishes. 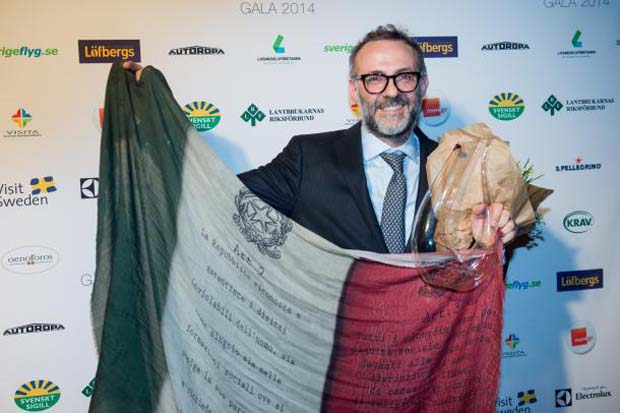 Yet in their citation for 2014's announcement, the judges make it clear that this year's laureate has both a talent for innovation and conservation. "In constant dialogue with a rich but conservative tradition, Massimo Bottura has developed a dazzling culinary artistry," the judges state, "covering a broad range of expressions from the seemingly simplistic to the intellectually complex. Re-engineering what a meal could and should be all about - bridging history with future, North with South, technology with legend and culture with environment, all with an artist's sensitivity and passion - he has been a major force in evolving the gastronomy of Italy from a standstill backwater to the bubbling melting pot of great traditions and talented innovation it is today."

Bottura, who was honoured at a White Guide Gala in Stockholm last night, founded his Osteria Francescana in Modena in 1995, after working at Alain Ducasse's XV in Monaco. He has since gone on to win three Michelin stars, and is now known for cooking innovative dishes using high-quality, traditional, local ingredients.

In our book, Cook It Raw we explain, "Not only does he produce his own balsamic vinegar, he has also helped to save the Bianca Val Padana breed of cattle from extinction. Their milk makes the world's best Parmesan, and has done so since the Middle Ages. But when Bottura deconstructs the cheese into foam and air, it is anything but medieval."

Congratulations Massimo; we're very happy for you. To find out more about the award, go here. To find out more about how Bottura balances innovation and tradition take a look at Cook It Raw, and read his selections in our book, Where Chefs Eat, available in print and as an app. You can also pre-order our forthcoming title Eating with the Chefs, which features family meals from the world's most creative restaurants, including Bottura's Osteria Francescana; and you can look forward to a dedicated Massimo Bottura book from us later this year.