Pretty spectacular as you'd expect! Our skinny Italian chef recalls the highpoints of a year that saw him become a household name and looks forward to a 2015 that will see him cooking all over the world - for a great cause

A couple of our 'How was 2014?' respondents have been somewhat reticent in their answers to our end of year interviews, preferring to allow the quality rather than the quantity, of their achievements to speak for their output this year.  Not so in the case of Massimo Bottura, our skinny Italian chef who catapulted to fame on both sides of the pond in 2014.

While we had to chase him long and hard - so busy is Massimo right now - when we finally pinned him down this morning he didn't disappoint. With characteristic, charismatic zeal this is what he told us about his 2014 - an incredible year that saw him catapult from number three on the 50 Best Restaurant list to become a household name in the UK and US. Next year the rest of the world awaits and you can rest assured Massimo - and his indefatigable wife Lara Gilmore, who's been with him every step of the way - have a plan for that. This is what Massimo told us this morning.

"The staff at Osteria Francescana. Before leaving to present Never Trust a Skinny Italian Chef in Australia, I had a long talk with the staff (kitchen and service) about our core values. I asked each of them to prepare an essay about the three things we all agreed are fundamental to Osteria Francescana: humility, passion, and dreams. I now have 35 handwritten letters and I am treasuring them one by one. Some make me cry; others have opened my eyes to the inner lives of these young women and men. Reading these essays is like looking into each of their souls. I am grateful that I have a job I love but I’m even more grateful to be able to do what I love with such incredible people by my side. Hats off to the passionate women and men at Osteria Francescana." 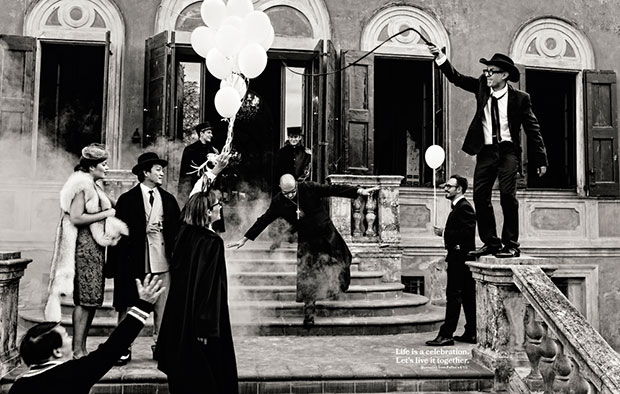 Massimo and the Osteria Francescana team photographed by Eating With The Chefs author Per-Anders Jorgensen for his magazine, Fool

"It is very hard to name just one personal highlight because it has been a big year for us. Top of the list however must be publishing my first English language book Never Trust a Skinny Italian Chef. I never thought that getting a book out into the world would bring back so much energy to the restaurant. Each encounter with a chef or food lover has given me yet another perspective on our kitchen. This exchange of ideas and passions is what we live for at Osteria Francescana.

"The second highlight of the year was an invitation to dinner by New Yorker journalist Jane Kramer. She surprised me not only with her 5-alarm chili but also with a special guest at the table – Cindy Sherman. Sherman is one of my favourite artists. I had never met her and I just was over the moon at the chance to talk and share ideas. Later she read the book and called it an incredible book, "as rich with inspiration as Massimo’s dishes are with flavour."

"The third personal highlight of the year was being interviewed by Charlie Rose.  My American wife was more nervous than I was. Not only did Rose impress me by the fact that he had read Never Trust a Skinny Italian Chef from cover to cover but more than an interview, there was an explosive exchange of ideas around the table. How rare is that?" 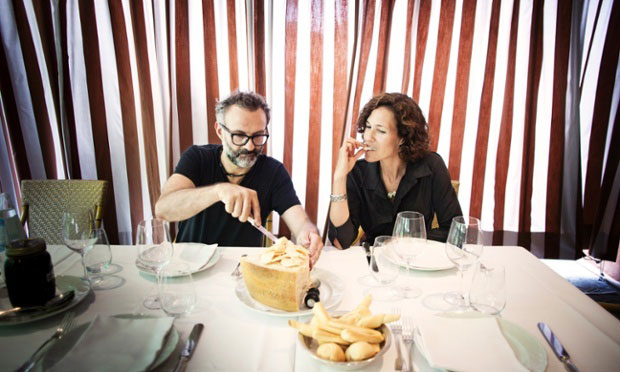 Massimo and his wife Lara

"You can expect lots of cooking in the most unexpected places. One of these will be Teatro Greco, an abandoned theatre from the 1930s located on the ‘wrong' side of Milan Central train station. As we speak it's being transformed from a theatre into a kitchen and contemporary refectory - Rifettorio Ambrosiano.

"The project, Food for Soul, is a collaboration with the archdiocese of Milan, Caritas (the Catholic charity organization) and EXPO 2015 creative director Davide Rampello. It will run over the 6 month lifetime of EXPO 2015, the theme for which is Feed the Planet: Energy for Life. I will be leading a group of volunteer chefs to prepare charity meals for Milan’s neediest families and residents. Joining us throughout this time will be some of my close friends from Lima, Copenhagen, San Francisco and beyond. The visiting chefs will be cooking, sharing a meal and spreading the message because the aim of the dinning hall is not only to fill empty bellies but it's also an opportunity to nourish the soul. We will be cooking small ‘miracles’ with discarded ingredients, scraps, left-overs and waste from the other pavilions at Expo. This message rages against the culture of waste. For me and my peers, Feed the Planet means that there are no more excuses: we must stop throwing away food.

"In addition to the culinary arts there will be artists and contemporary designers present. Thirteen one of a kind wood refectory tables have been designed by designers like Antonio Citterio, Alessandro Mendini, Piero Lissoni, Patricia Arquiola and Fabio Novembre. We will open our doors in May 2015 but that is just the beginning. We hope to bring the Food for Soul project to locations around the world in the future."

We still have a few signed editions of Never Trust A Skinny Italian Chef in the store. But like Massimo, they're moving fast so don't hang around!