If you’ve visited the fantastic Ai Weiwei Royal Academy show you may have been intrigued by the sight of a marble pushchair at rest on a huge expanse of marble ‘grass’ that dominates one of the rooms.

Not many artists would think of trying to create something so complicated and so delicate. Marble is a fragile and unforgiving material and the piece serves to remind us that one of the key things that Weiwei does so well is push the boundaries of what a material - as well as a state - will tolerate.

Marble is, of course, one of Weiwei’s signature materials – the show features a number of video cameras made from the material – a reference to the 20 or more CCTV units trained on his studio and indeed, the video camera he uses in his own work. But you may not know that much of the marble Weiwei uses comes from the same quarry historically used for the Forbidden City during the Ming dynasty and also more recently was used in the Mao Tse Tung mausoleum in Tiananmen Square. So there’s a very deliberate selection process at work – it’s not just any old marble, but marble cut from a place freighted with Chinese history and governmental power.

That said, we suspected there would be a bigger story behind the inclusion of the pushchair, so we asked the co-curator of the show Adrian Locke about it. This is what he told us.

“Cao, which is the name of the piece, has many different interpretations in Chinese, depending on the pronunciation. It can be used as a swear word, it can be used to refer to grass roots and indeed there is a resilience in grass that Weiwei has connected to - the sense that grass can flourish, can be green and can be verdant and beautiful but, at the same time, can die back, look dead but cling on to life and come back. So there is this idea that hope springs eternal.

“But the push chair has its origins in a very everyday event. Weiwei is a creature of habit: he gets up early in the morning. He has very intense mornings of work, meeting people and developing his ideas and after lunch he usually takes a walk in the park and exercises. 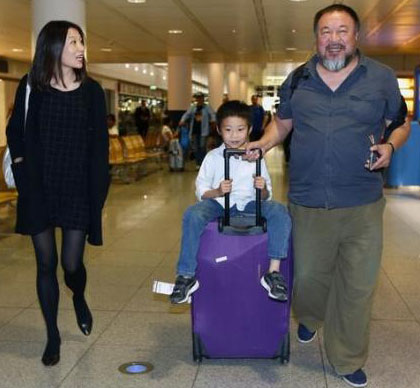 “As was his habit he would take his son Ai Lao with him. On one occasion when he was in the park he noticed someone taking photographs of him and Ai Lao and he was a bit suspicious about this so he went up to this person and started talking to them.

“The person claimed to be a tourist and that it was completely coincidental he was taking pictures and that (Weiwei) happened to be in them.

“Weiwei persisted, he has this way of engaging people that’s very direct in an authoritative way, not aggressive or confrontational as such but he speaks with a degree of authority and belief which makes people quite anxious, quite nervous. Normally in China, only people with authority can talk to somebody in that way. Somehow he persuaded this person to give up the memory card from his camera and when he got back to his studio and plugged it into a computer, sure enough, there were photos of him and his son and the pushchair, zoomed in and obviously taken from some distance. Quite why somebody would need to take such photos is a mystery. There were also photographs of him in restaurants, photographs of him leaving his studio, and photographs of people who he didn't recognise.

“Basically, this was an undercover, secret agent working for the police, gathering information, so again (the work reflects) that sense of monitoring, of being monitored. That’s the story behind the push chair, a very direct kind of connection.”