Roman Signer is an artist like no other. Although he identifies himself as a sculptor, he is best known for actions in which simple materials (rockets, balloons, rushing water) react with natural forces to yield surprisingly lyrical results. Part mad scientist, part sorcerer’s apprentice, part Buster Keaton, Signer often appears in these actions, sometimes at considerable risk to himself. The real star of his works, however, is time. In works such as Sandbag with Timed Detonator (1988), an auto-destructive device featuring a plastic alarm clock that realeases a heavy sandbag hanging above it, two periods of tranquil rest are bridged by an instant of sudden violence. In others the change is more gradual, as in Action with a Fuse (1989), a twenty kilometre, thirty-five day ‘time sculpture’ in which two hundred lengths of fuse burned a path to Signer’s current hometown from the village of his youth.

Signer’s Dadaist love of the absurd can be seen in artworks as diverse as Cap with Rocket (1983) – in which the artist lights the fuse on a rocket and waits tensely until it shoots high into the air, taking his hat with it – and an enigmatic Table (1994) floating off the coast of Iceland, blithely unaware of its sublime surroundings. Signer’s work has been exhibited at major venues across Europe and North America, as well as such top international exhibitions as Documenta 8 (1987), Skulptur Projekte in Münster (1997) and the 48th Venice Biennale (1999), in which he represented Switzerland.

In the Interview, Paula van den Bosch speaks to the artist about the origins of his interest in art and explosives. Gerhard Mack’s Survey traces the key themes in a career that spans four decades, from the artist’s early experiments with elemental materials to his large-scale explosive actions. In the Focus, Jeremy Millar visits the artist in Switzerland to retrace the path of the epic 1989 Action with a Fuse. For the Artist’s Choice, a nineteenth-century text on ball lightning reflects a timeless awe at the science of natural phenomena. Artist’s Writings include an early interview with German critic Lutz Tittel, a detailed proposal requesting permission for a series of actions in Graz, and an recent speech that recounts the year Signer spent studying in Poland in the early 1970s, an experience that had lasting effects on his art – and his life.

Gerhard Mack is an art and architecture critic based in Switzerland. Previous publications include Art Museums of the 21st Century (1999) and Herzog & De Meuron: the Complete Works (1996, 2005). He has also written extensively on the work of Roman Signer.

Paula van den Bosch is Curator of Contemporary Art at Bonnefantenmuseum, Maastricht, where she organized a major retrospective of Roman Signer's work in 2000.

Jeremy Millar is an artist, critic and curator who has organized exhibitions at the Whitechapel Art Gallery, the Photographers’ Gallery and the Institute of Contemporary Arts (ICA) in London. 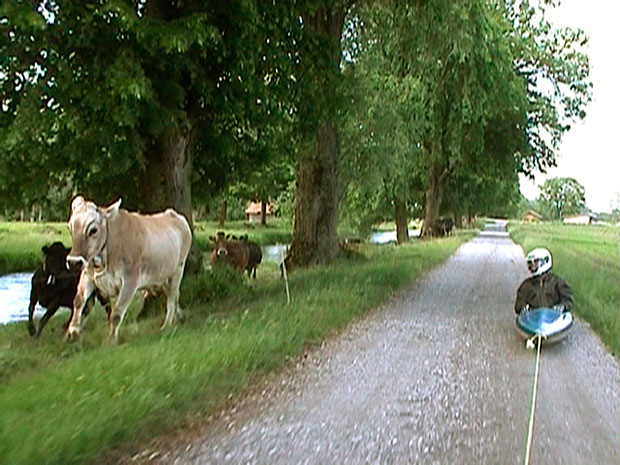