Alison Klayman's movie opens this summer. Watch the trailer here and find out how to win tickets to the premiere

Ai Weiwei: Never Sorry is the first feature-length film about the Chinese artist and activist. The film, released this summer, examines the complex intersection of artistic practice and social activism as seen through the life and art of China's preeminent contemporary artist. From 2008 to 2010, Beijing-based journalist and first time filmmaker Alison Klayman gained unprecedented access to Ai Weiwei. Klayman documented Ai's artistic process in preparation for major museum exhibitions, his intimate exchanges with family members and his increasingly public clashes with the Chinese government.

Klayman's detailed portrait of the artist provides a nuanced exploration of contemporary China and one of its most compelling artists. The film begins as Ai Weiwei readies his 2009 Sunflower Seeds installation at the Tate Turbine Hall and follows him through him a campaign based on the 2008 Sichuan earthquake. 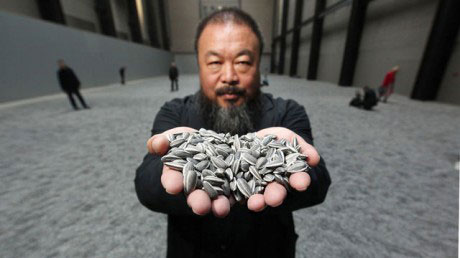 It was this 2008 campaign, during which Weiwei made full use of social media (he tweeted asking people to record themselves intoning the names of the schoolchildren victims), that turned him from art world luminary into international figurehead for the pro-democracy movement. Along the way Chinese authorities shut down his blog, beat him up, bulldoze his newly built studio and hold him in secret detention. The film ends with him released on bail and unable to talk to the media.

Ai Weiwei: Never Sorry has its world premier in Berlin on Saturday June 2 and Klayman has given us a pair of tickets for one lucky phaidon.com reader to attend with a friend. If you'd like to attend, email your name and the name of your guest to features@phaidon.com

The competition runs until 22.00 UK time (Thursday May 31) when we will notify the lucky winner. Meanwhile, we hope you enjoy the trailer, and if you do take a look at our Ai Weiwei monograph.