What does Ai Weiwei’s studio look like? Like an ‘examination room’ he tells the New Yorker’s staff writer and former Beijing correspondent, Evan Osnos, during a brief tour of the premises at the beginning of their hour-long online conversation, which was filmed and shown as part of the New Yorker’s annual festival, earlier this month, and has just been posted on the magazine's site.

Originally, the pair had planned to chat live. However, three weeks before the festival opened Ai asked to prerecord their conversation, after the police warned him against any high-profile online appearances.

Live or not, Ai’s interview is still revelatory. We might think of him as a sculptor or installation artist, yet one of his principal projects at the moment involves an archive of some 700,000 photographs. These, he tells Osnos, enables him and his countrymen to remember China's past, something many Chinese people, with the encouragement of the state, are “intentionally forgetting.”

Comments like this might account for Ai’s continued surveillance. “I’m still kind of under a soft detention,” he says. “My phone is tapped my computer is searched, they know exactly what I am doing.” 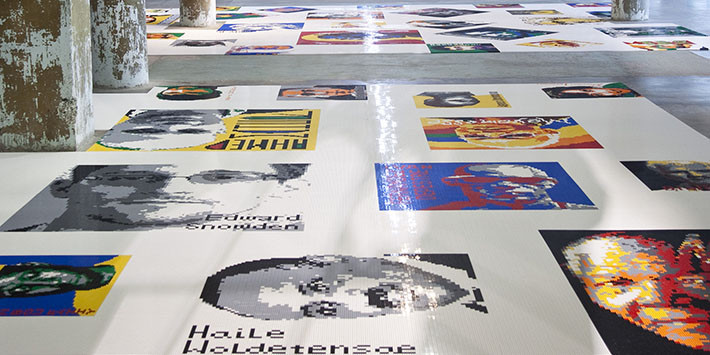 This hasn’t stopped him from hosting exhibitions around the world. He offers a little commentary on his current show at Alcatraz. Why, Osnos asked Ai, did he choose to recreate portraits of political dissidents from Lego bricks for the show's work, Trace? Partly because of the democracy of the form, and partly because a heavily pixelated shot suits of a Lego collage. “Lego is such a perfect tool,” he says, “if you build a blurry image, that’s even better.”

Ai also values such an open-minded approach to forms and media when he looks back at art history. He says he admires Andy Warhol, partly because the artist was “at least half a century ahead of his time.”

“I think what he was doing is what we’re doing today,” Ai explains, “to use any media: conversations, film, interviews, to share simple ideas. It’s so essential to liberate ourselves from the high aesthetic, to tell people we have the same fears and desires.”

Today, Ai himself finds the easiest place for such democratic output is often online. Yet, in a telling anecdote, he reveals that he was no natural when it came to the World Wide Web, and it was actually the Chinese blog-hosting service, Sina Weibo, that first encouraged him to start blogging in 2005, even going to the lengths of sending a technician to his studio and instructing the artist in the basics.

Nowadays, by contrast, he says “the internet is my country, and I would die for it.” Let's all hope the Chinese government won’t ever test that last pledge. Watch the full interview above, and for a richer understanding of this important artist, buy a copy of our book, Ai’s first full monograph, here.