Is Zhao Zhao set to become the next Ai Weiwei?

There's an interesting article in the current Spiegel which looks at the increasing attention paid to artist Zhao Zhao by the Chinese Government. Zhao, 30, is one of China's most promising young artists. His paintings, sculptures and videos address realities in his country, as well as documenting his life and those of his friends - one of whom is Ai Weiwei with whom he worked for seven years.

Zhao was supposed to have a major solo exhibition in New York this year, at a gallery owned by Christophe Mao, an art dealer active in both Beijing and New York. For Zhao the exhibition would have been an important step toward making a name for himself internationally. He packed up a large number of his works to be shipped by sea - but, according to the article, the shipment never left the port of Tianjin. Customs police confiscated it.

One of the items seized was a sculpture of Zhao's consisting of the shattered pieces of a concrete statue, a figure of an enormous police officer. The number on the officer's uniform is the date on which Ai Weiwei was arrested in 2011. Zhao made the sculpture during Ai's imprisonment.

Zhao showed the work publicly for the first time in October 2011 in a Beijing gallery. Nobody batted an eyelid. However, a few days before a subsequent group show at the gallery polic turned up and and ordered the removal of the sculpture from the show reportedly claiming,"It wasn't art". 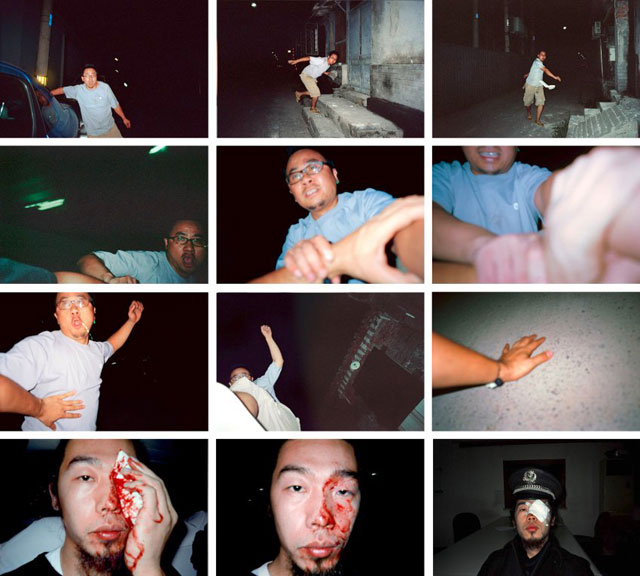 After his art shipment was confiscated, Zhao was told he'd have to pay a fine of 300,000 yuan ($48,000) even though there had been no crime. Zhao says that he was further informed that even after paying the fine, he would not get his work back - but would be allowed to view it one last time before it's destroyed. Zhao expects to be accused of tax fraud as well - tax evasion being a favourite with Chinese authorities - Ai Weiwei has been accused of the same.

Incidentally, one of Zhao's recent works is a photorealistic painting modeled after a photograph Zhao took for Ai Weiwei two years ago that shows the artist with four women, all of them naked. Ai is currently being investigated for pornography regarding the photo. Zhao turned the image into a large-format painting but when it was offered for sale at an art fair in Singapore, not one Chinese newspaper reported the fact.

The Spiegel story goes into far greater detail and with some interesting testimony from gallerists and dealers on exhibiting and selling art in China as well as from Zhao himself. Read it here.