Photos That Changed The World – Steamfitter

Did this worker in Lewis Hine’s famous photograph do a good job? From a strictly mechanical point of view, no. The huge spanner that the steamfitter is holding is not fitted on to the nut, and is at the wrong angle to gain any real purchase. However, aesthetically, this Pennsylvania power plant worker fulfilled his task perfectly, expressing the photographer’s beliefs about the nobility of industrial labour. Lewis Hine – who was born on this day, 16 September, in 1874– was one of the first to capture and express an early conviction in the dignity of industrial work.

“Hine’s idea in 1920 was to show that men, rather than machines, produce industrial wealth,” explains Ian Jeffrey in the Photography Book. “This icon of work anticipates Soviet pictorial types during the 1920s and 30s, and indeed is echoed in Hine’s own book Men at Work (1932), which focuses on the construction of the Empire State Building.” 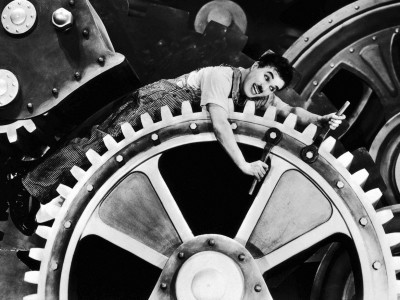 A still from Modern Times (1936) by Charlie Chaplin

We can detect later echoes of Hine’s steamfitter and other workplace pictures in Russian Socialist Realism, the ordinary working folk captured by the Depression-era Farm Security Administration, as well as in films such as Fritz Lang’s Metropolis or Charlie Chaplin’s Modern Times, and, perhaps even in the later, neoclassical nudes of Robert Mapplethorpe. Yet, while Hine knew how to take a good photograph, his interests were more political than aesthetic.

“Between 1907 and 1918 he worked for the National Child Labor Committee, an organisation set out to publicise abuses,” Ian Jeffrey explains. “He took pictures in mines, factories and mills, and has subsequently been admired for his ability to make portraits of those whom others would have seen only as representatives. His respect for the individual, who was often maimed, exploited and oppressed, established him as an embodiment of American values.”

A still from Metropolis (1927) by Fritz Lang

A few decades later, the ennobling of workers and other such socialist sympathies would be viewed, at least by Senator Joseph McCarthy and others on the right, as entirely un-American. Today, the loss of US industrial jobs is mourned on both sides of the political divide.

Whomever Americans vote for next month, most will be able to recognise the self-respect industrial vocations once possessed, just as easily as Hine first expressed it in this photo.

For greater insight into this photograph and many others that changed the world, order a copy of The Photography Book here. For more of Hine’s work, order this pocket-sized monograph, here.