A few days ago we brought you Stan Douglas’s latest exhibition Midcentury Studio, in which the Canadian photographer recreates the gritty glamour of 1940s crime photography. Now, here's a look the cult icon who inspired the series. For Midcentury Studio, Douglas looked to the work of 1930s and 40s crime and tabloid snapper Weegee – an infamous New York character whose cinematic shots of chalk-outlined corpses at crime scenes and scandalous happenings in the city’s drinking dens informed the narrative for Douglas’s fictional Chicago-set series. Douglas used actors in order to re-create a fictional a world where mob bosses were celebrities and grizzly crime scene shots sold newspapers, but the truth behind Weegee’s own life is itself deserving of coverage as a post on one of our favourite photography blogs American Suburb X points out. In a feature that originally appeared in Art Forum in 1998, Max Kozloff explores Weegee’s troubled background, dark sense of humour and the “strikingly incongruous emotional content” of his work. See the article here. 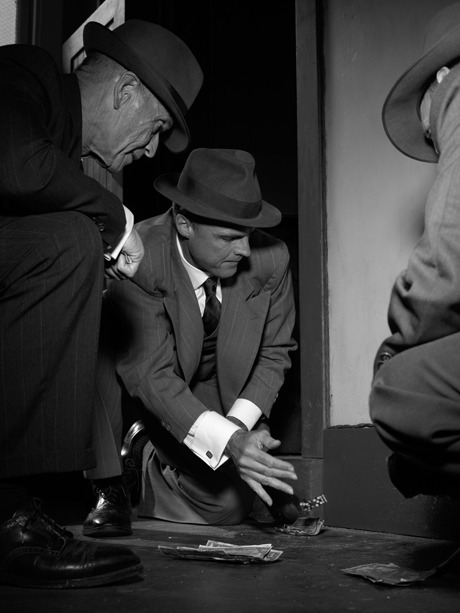 Stan Douglas, Midcentry Studio is at London's Victoria Miro gallery until May 26. Stan Douglas by Phaidon is the most comprehensive book on the artist’s career. Following his career from his early TV dramas to his spectacular large-screen installation, Der Sandmann, exploring childhood trauma. The book features a survey by Scott Watson, an interview by Diana Thater and writings by Douglas himself.