Photos that changed the world #6 Self-Portrait

What’s happening in this picture, or rather, what has happened? What’s covering this man’s face? Is it paint, or plaster, or some other substance? Why is there a black line bisecting his head? Does he look ashamed, subdued, pained? Is he even alive?

Today the shot might remind us of a schlock horror-movie still, yet in 1960s Vienna it’s hard to imagine what people made of it. The 20th century Austrian painter in the picture, Günter Brus, had studied to become a commercial illustrator, but following his discharge from military service in the early 1960s he lost interest in its potential.

Instead, he pursued an extreme take on the action painting Pollock and co. had pioneered a decade or so earlier. However, rather than return the creative act of painting to some state of pure innocence, Brus, and his fellow Vienna Actionists hoped to probe a far darker side of humanity. His ‘actions’, or performance pieces, paired paint with the human body and its fluids. His works were supposed to be shocking. Yet they were also an attempt to make art to match the recent horrendous war crimes of an earlier generation, and record it with modern methods: photography and film. This picture is taken just 19 years after the fall of the Third Reich, and responds to the horrors of that earlier time by creating a latter-day bogie man.

The act, which is caught not in a painting, but in a photograph, is, perhaps a vent into the same hellish mindset that brought forth the death camps of National Socialism. Or perhaps Brus is acting out some latter day horror in an attempt to exorcise or atone for the sins of that early generation? 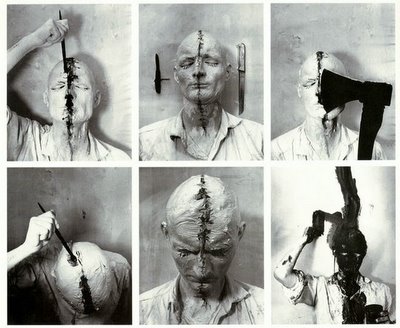 “The work was a performance closely allied to photography,” writes Ian Jeffrey in our newly revised edition of The Photography Book, “and was intended to show a self-inflicted savagery aimed at taking the sins of the world on his own shoulders.”

It’s a painting and a performance, a theatrical confection responding to very real events, yet it’s brought to us through the medium of photography. Indeed, the image itself was actually taken by the Austrian press photographer, Ludwig Hoffenreich. Nevertheless, Brus remains the greater creator. He bundles extreme artistic methods, violent recent history, and news footage gore into a single frame. It’s a performance, a painting, a protest and a photograph. And by combining all four, Brus the painter remade photography.

You can read previous entries in our Photos That Changed The World series on Weegee, Ansel Adams, Richard Avedon and Eadweard Muybridge; and if you like what you've read, you'll find a whole lot more in The Photography Book here.