Next week Phillips is auctioning two very similar Hirst prints but why is there such a big difference in their price?

One is named after a skincare ingredient; the other is untitled and comes from a set of prints commissioned by Kunsthaus Bregenz. The former dates from 2008, while the latter was made in 2007. Oleoylsarcosine (2008) had its spots individually applied, while Untitled, from Re-Obect Mythos portfolio, (2007) had its stuck on all at once.

Oleoylsarcosine is framed, and one of 100 prints plus 20 artist editions while Untitled, from Re-Object Mythos portfolio is unframed and one of only 45 prints. Otherwise, these two Damien Hirst works appear to be remarkably similar, both produced using comparable materials, and of pretty much the same dimensions. Both are being offered for sale at Phillips' inaugural editions sale, taking place at its London auction room next Wednesday evening.  So why does Untitled, from Re-Object Mythos portfolio, (2007) carry a sales estimate of £5,000 - 7,000, while Oleoylsarcosine (2008) carries one of £20,000 - 30,000?

The ever-brilliant ArtInfo posed this question to Robert Kennen, Phillips's print specialist. Initially, Kennen drew a distinction between the way the spots are applied in each case - the more expensive one has its coloured circles applied one at a time, while the cheaper version is etched on simultaneously; "Damien Hirst [is] playing with the notion of what's unique," he told ArtInfo. The article's author, Shane Ferro, concurs, wondering whether such distinctions, clear upon personal inspection, might be lost on buyers purchasing through internet auctions - the Phillips sale will accept live, online bids. 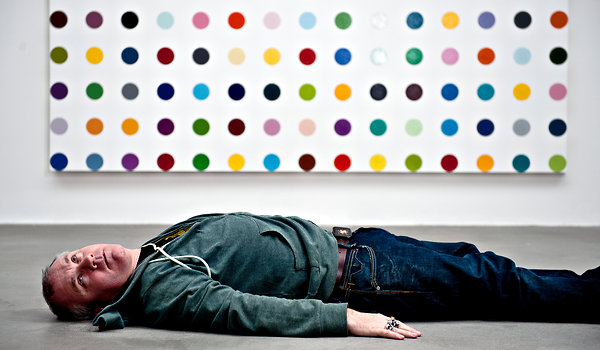 However, Kennen also concedes that "sometimes the consignor" - the person who is selling the work through the auction house -" demands a particular price." Given the recent fluctuations in Hirst's work, it is conceivable that the more expensive spot print was bought by a collector at the top of the market, and, he or she doesn't want to sell the piece for less than this initial purchase price, regardless of market conditions.

From an economic point of view, the art market is far from perfect, yet there's rarely so clear an example of price disparity than this. Whatever the outcome, we wish both consignors and bidders success in Wednesday's auction. To find out more, visit Phillips site, read the ArtInfo piece and, for greater insight into the complicated but eternally rewarding nature of accruing an art collection, (or rather the_ right_ art collection) you owe it to yourself to consider our forthcoming book, Collecting Art for Love, Money and More, published in April - a sound investment if ever there was one.