Did you see JR’s cover story on last Sunday’s New York Times Magazine? The French artist shot portraits of 16 recent immigrants to the US, individuals whom many New Yorkers might pass by without appreciating the struggles each went through to get to the United States.

As JR explains in our video, shot earlier today in Phaidon’s London offices, immigration is a subject that has intrigued him for some time. The Parisian artist is himself an immigrant, having lived in New York on and off for the past four years.

His 2014 project Unframed — Ellis Island, saw JR paste archive photographs of early 20th century arrivals to New York’s famous immigration facliity. When the Times contacted him, JR suggested that rather than take on an entirely new commission, he could perhaps extend this existing interest in the city's unseen overseas arrivals for the paper’s weekend supplement. 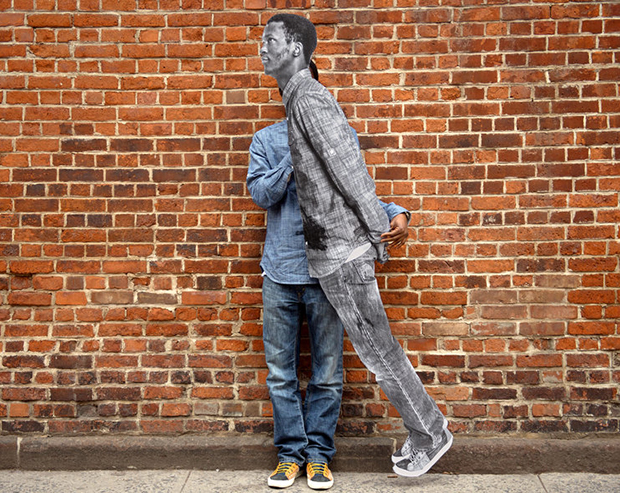 JR and his work for the New York Times. Image courtesy of JR

His shadowy, life-size black-and-white portraits, printed on rough stock paper, capture something of the subjects’ penumbrous lives. Indeed, it is an effect that the artist heightened for the Sunday supplement’s front page. The cover image features JR’s huge portrait of Elmar Aliyev, a 20-year-old waiter from Azerbaijan. The artist printed off a 50-metre-tall image of Aliyev, and pasted it onto Flatiron plaza, the pedestrian concourse in Manhattan that lies between Fifth Avenue, Broadway and East 23rd Street.

“I decided to paste him so big,” explains JR “but on the floor, so [people] would walk on him without noticing, which is what would happen anyway, because in the city everyone is in their own world.” 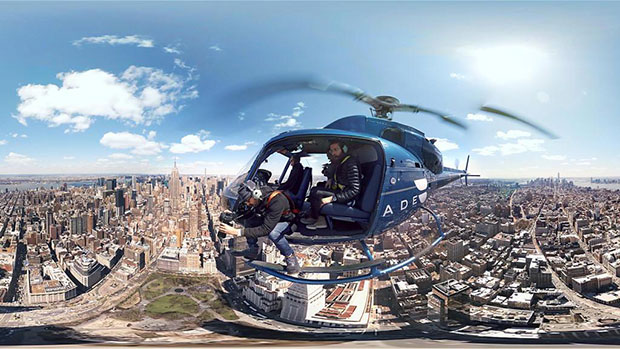 However, JR reversed these roles when he created the final aerial image for the paper, shot from a helicopter. “I went up and photographed it from above,” he explains. “In the image that made the cover, he [Aliyev] is in the light and everyone else is just shadows, whereas [normally] he was in the shadow of everybody else.”

This canny, yet simple visual approach exemplifies JR’s attitude towards art. As he says in our interview, he prefers to “tell the story of our day, without needing to resort to titles.” “I don’t really want to mess with my work,” he goes on. “I want it to be visible to anybody.”

He still understands that everyone’s interpretation is subjective. “Each person reads a photo depending on where they come from, what they went through, what they feared,” he says. “It’s going to impact you in a different way from how it impacts me. That’s fine. The beauty of art is that it’s different; I like people to make use of my work to share their own ideas.” For more JR-style food for thought, watch the video above or read more about the New York Times work here.

Check back soon for news of our forthcoming JR monograph. For greater insight into this artist, read this profile, and for more on art made outside the gallery system take a look at Wild Art.