Banksy speaks to the Village Voice

The last prominent press interview Banksy granted was with the Guardian in 2003, so it’s nice to read his words more or less first hand, in this newly published Village Voice article. The interview, which went online yesterday, was conducted with the Voice’s Keegan Hamilton via email, and coincides with the street artist’s self-described New York residency.

In the piece, Banksy say his intensions for this month-long series of New York street pieces were pretty basic; “the plan is to live here, react to things, see the sights—and paint on them. Some of it will be pretty elaborate, and some will just be a scrawl on a toilet wall."

He also admits that the pace of development in New York often stymied his plans. As the Voice explains, “Banksy says he visited New York ‘a couple of months ago’ to scout locations for the October show, but he ‘returned to find most of the empty lots I planned to use have got condos built on them already.’” 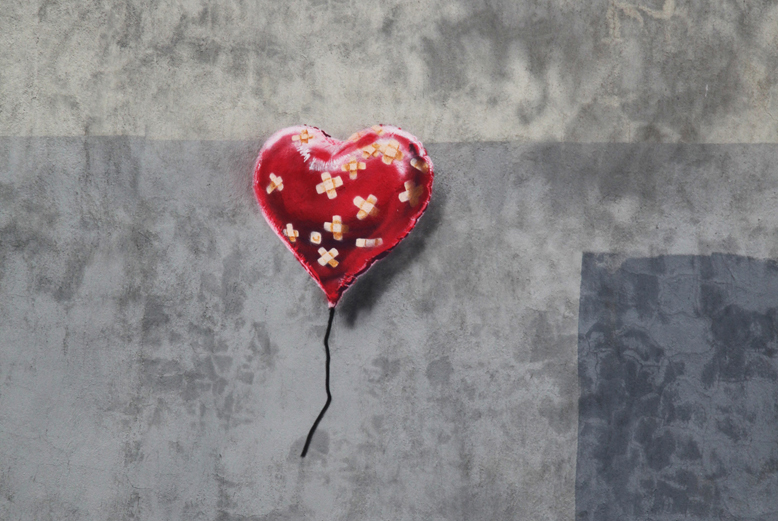 Commercially, the street artist says he has little to gain from his New York works. "There is absolutely no reason for doing this show at all,” he explained to the Voice. “I know street art can feel increasingly like the marketing wing of an art career, so I wanted to make some art without the price tag attached. There's no gallery show or book or film. It's pointless. Which hopefully means something."

He also admits that he made a mistake with his last show in 2008, when he hired an outdoor adverting firm to paint murals promoting his pet-shop style installation.

"I totally overlooked how important it was to do it myself," he explained. "Graffiti is an art form where the gesture is at least as important as the result, if not more so. I read how a critic described Jackson Pollock  as a performance artist who happened to use paint, and the same could be said for graffiti writers—performance artists who happen to use paint. And trespass."

It’s an interesting interpretation of Harold Rosenberg’s words, and perhaps proof that, while Banksy is the world’s most commercially successful graffiti artist, he retains a degree of thoughtfulness that belies his slick jokes and pecuniary success. Indeed, having made his fortune, he appears to be questioning the role of the art market in street art.

"I started painting on the street because it was the only venue that would give me a show,” he states in the piece. "Now I have to keep painting on the street to prove to myself it wasn't a cynical plan. Plus it saves money on having to buy canvases. But there's no way round it—commercial success is a mark of failure for a graffiti artist. We're not supposed to be embraced in that way. When you look at how society rewards so many of the wrong people, it's hard not to view financial reimbursement as a badge of self-serving mediocrity." 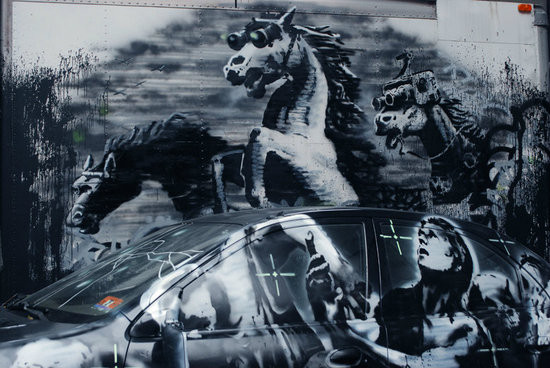 It’s reassuring to know that he thinks about these sort of things, isn’t it? While we can take or leave some of Banksy’s work, we think this New York series is pretty good. The latest piece, two vehicles adorned with stampede of horses in night-vision goggles, is improved dramatically by its accompanying commentary. Visitors who dial the work’s 1-800 number will hear the audio track from 2007 helicopter gunship footage leaked by private Bradley Manning, wherein US army personnel, using the call signs Crazyhorse 1/8 and Crazyhorse 1/9, kill a number of Iraqi civilians. It’s hard to think of another artist who might put things together in that sort of way.

Read the full piece here. Check here for Banksy’s New York pieces, and for more on art outside the gallery system, take a look at our Wild Art book.