An early, fully authenticated Banksy print, Love is In The Air, goes on sale this month. Is it a good buy?

Some of us are so old and ugly we remember a time when authentic Banksy prints were sold for a little over £1,000 from a modest (and that's putting it kindly) office in the East End of London. This was, of course, before he produced the artwork for a Blur album, became the subject of numerous Daily Mail features, featured in an Academy-Award nominated documentary, and had his works sold to the likes of Damien Hirst, Christina Aguilera, Brad Pitt and Angelina Jolie.

So, has the street artist joined the ranks of an elite group, for whom sale prices only keep climbing? Certainly his better works look like sound investments. The print above, Love Is In The Air, depicting a rioter throwing a bunch of flowers rather than a Molotov cocktail, is currently listed on Bonhams site, and goes to auction on 27 June with an estimate of £100,000 ($160,000; €120,000). That might sound like a lot for a work, which, in less formal circles, changes hands for a few thousand. 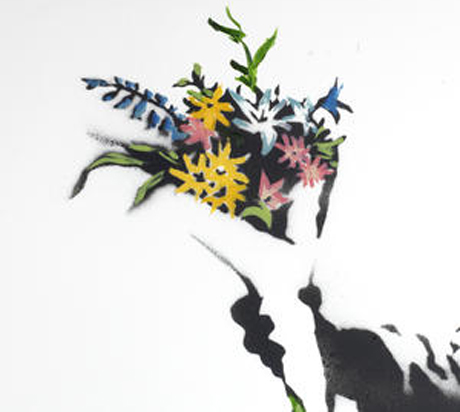 However, an unauthenticated 2012 street painting attributed to Banksy, Slave Labour, sold for a little over £750,000 in London earlier this month. This work, meanwhile, comes with a certificate of authentication from Banksy's own handling service, Pest Control, and was bought directly from the artist, seven years ago. 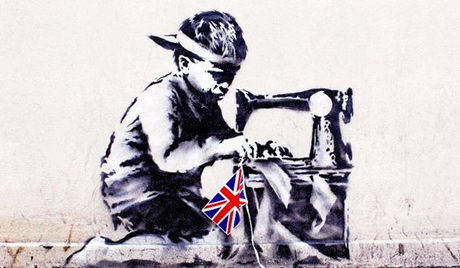 The Bonhams piece, is perhaps a better-known one than the Slave Labour work, which was cut from the wall of a North London Poundland shop back in February; many Londoners remember Love Is In The Air adorning a wall on the corner of Noel Street and Poland Street in Soho a few years back.

Other editions of this print appear to date from 2003, before his earliest British solo shows. In short, it's a strong, representative piece, from a name artist with strong (jargon alert) 'wall power'. Anyone with an interest in street art and with money to spare might want to pick up a paddle towards the end of June.

Of course, Banksy allows anyone to download a selection of his images from his website, "for personal use"; he writes "making your own art or merchandise and passing it off as 'official' or authentic Banksy artwork is bad and very wrong."

For more on this sale go here; for greater insight into art produced outside the gallery system, take a look at and pre-order our new book, Wild Art, a visual exploration of everything and anything from outside the exclusive and rarefied spectrum of the 'artworld'.