Jocks and artists don't, on the whole, mix. So, artist and erstwhile sportsman Matthew Barney's Drawing Restraint series is, in this respect, all the more remarkable. As Barney explains in this video, the work began in 1987, while he was still studying at Yale. The artist says that, on starting out, he wondered which personal experiences he could draw from. Barney decided his time spent on the football field as a high-school athlete was among his most intense, and so named The Drawing Restraint series after the way one develops muscle, by manual exertion and physical repair.

Of course, the series, now on its 19th iteration, has strayed far from the sports field and gym, taking in Japanese religions, petroleum jelly and whaling. Yet, if anything connects the series, it does seem to be some austere, sportsmanly exertion.

In this, its latest incarnation, Drawing Restraint 19 engages with the distinctly less jock-like sport of skateboarding. As Juxtapoz magazine explains, Barney produced a skateboard as part of the series, to benefit Detroit's RideIt Sculpture Park, an urban renewal project.

Barney's board has a chunk of pencil graphite set under its front end. When a rider performs a nose manual - or rides on the foremost wheels the front tip facing down - the graphite scores a mark on the riding surface. Barney donated the board to the park, on the understanding that it would be ridden. His wishes were obeyed, when skateboarding champ Lance Mountain rode the board at the park. It was then auctioned off, eventually went to a local skate shop, while the pencilly marks - the greater work, we think - remain on the sides of the park. To find out more, take a look at the full Juxtapoz piece, here. 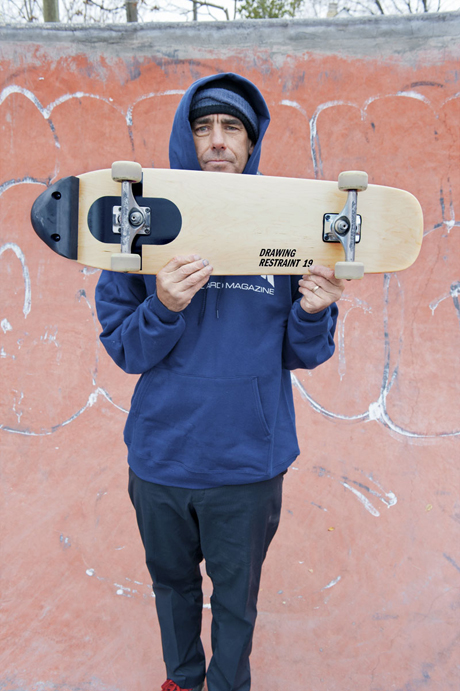 Lance Mountain with Matthew Barney's board, by Joe Brook, courtesy of Juxtapoz Magazine