Putting a dead body in an art gallery is difficult, from both from a moral and a legal perspective. Earlier this year, John Baldessari restated his desire to display a cadaver as part of a 1970s concept work, previously abandoned due to a myriad of  bureaucratic difficulties. Now, news reaches us that the Danish activist Martin Martensen-Larsen plans to preserve and paint gold plate the body of Texan death row inmate, Travis Runnels following his execution.

The work, entitled, The Unifier, is a scaled down version of The Lincoln Memorial, and will, according to Martensen-Larsen, show “how the death row inmate is actually one of the most valuable persons in the society,” since the death of folk like Runnels, who was sentenced to death in 2003 for murdering a prison employee, “redeems the blood sin of society.”

Far from glorifying the American execution system, Martensen-Larsen tells The Art Newspaper ,“I want to confront people with the death penalty and demystify it, since for many it is an abstraction.” Indeed, this is not the first time the Dane has worked with Death Row prisoners. In 2011 Martensen-Larsen auctioned off tickets to Runnels' execution, while in 2012 he placed the ashes of Karl Eugene Chamberlain (executed in 2008) into an hour glass and which he displayed in a Danish church. 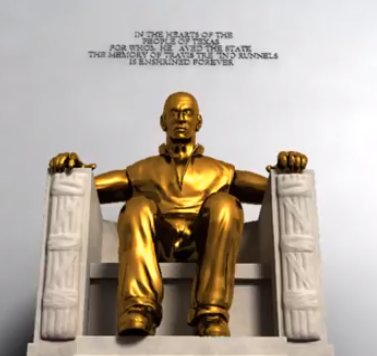 Martin Martensen-Larsen's rendering of The Unifier

Is this prurient, tasteless exploitation, or a shocking way to draw attention to the death penalty? Aesthetic difficulties aside, two US galleries, one in Texas the other in Washington DC, have apparently expressed interest in showing the work. Never-the-less, in spite of both Runnels' approval, it remains unclear whether current legal restrictions would allow the artist to complete the work.

To further complicate matters, Martensen-Larsen doesn't truly regard himself as an artist, more a legal activist (and trainee lawyer) who has used these works to voice his disapproval of state executions. You can read more about Runnels's back story here. Meanwhile, whether you approve of this particular work or not you may be interested in our book The Artist's Body.

Beginning with key artists such as Marcel Duchamp and Jackson Pollock it examines a selection of the most significant players who have used their bodies to create their art – among them, Yoko Ono, Chris Burden, Vito Acconci, Marina Abramovic, Tracey Emin and Mona Hatoum. And for more on art that operates outside "the normal boundaries" - whatever they are - consider pre-ordering our great new Wild Art book which we'll be telling you more about in the coming weeks.