Banksy's first NY artwork painted over within a day

Rival artist or the authorities? Who erased The Street Is In Play, the first piece in Banksy's month-long residency?

Banksy's first piece of New York street art has been painted over - just one day after it went up. The artist announced at the weekend that he was beginning a month-long residency in the city. On Monday the first piece of art, depicting two boys holding a spray can and entitled The Street Is In Play, was spotted in Manhattan. By yesterday (Wednesday) morning however, it had been painted over. It's not yet clear who was responsible.

This morning (Thursday) however, a new piece was spotted on a garage door. It reads "This is my New York accent". The words "I normally write like this" are below in stencilled text.

Both works form part of an ongoing open-air exhibition, called Better Out Than In, which the artist says will last for a month on the streets of New York. Banksy's NY show is, in a way,  a rite of passage for any street artist and he's following in the (now well-heeled) footsteps of Keith Haring and Jean-Michel Basquiat. 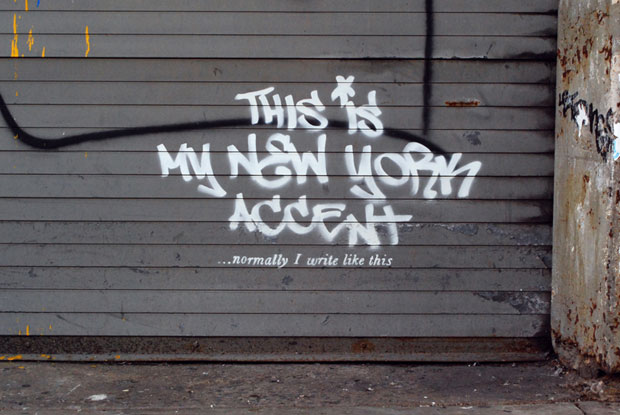 Better Out Than In - Banksy

Meanwhile if you're interested in a super contemporary look at street art and other forms of art that operate outside the established gallery system you can do no better than purchasing a copy of David Carrier and Joachim Pissarro's absorbing, engaging and often astonishing new book Wild Art.