The otherworldly sculptures created by London-based artist Kate MccGwire are made from the moulted feathers of common British birds, including some that are often treated as vermin - pigeons. These specimens, which have the look of prized taxidermy or preserved mythical creatures, stir up conflicting emotions in the viewer, who has to reconcile a mixture of awe and repulsion. Much of her work references Freud's _Unheimliche - _the uncanny or unhomely, a place where the familiar can excite fear. The work, says MccGwire, “disgusts and then seduces in a way that brings to light our relationship with feathers and familiar but disconcerting forms.”

MccGwire hit the ground running at the start of this year: following a solo presentation of her work for Crane TV at St Martins Lane, she is now preparing new works for her first major solo show, which will take place in November this year. Four newly created new cabinet pieces called FINE, Guile, Seer and Yearn, are currently available to view by appointment at her gallery, London’s All Visual Arts.

Why are birds significant?

Birds are at once prehistoric and contemporary; they have lived alongside us for millions of years and have changed in form very little. We have a significant cultural relationship with them - crows, pigeons, magpies, all carry unique symbolic meaning. Birds are important because we overlook them when in fact they are looking over us. 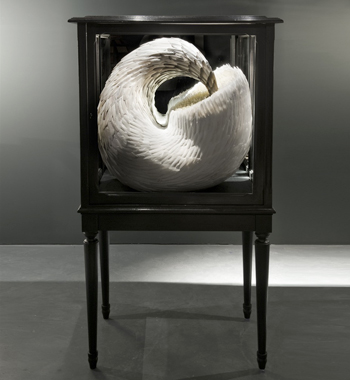 How does your work aim to either reflect or challenge people's perceptions of them?

It reflects and rejects the binary nuances of birds. My work plays on that attraction and repulsion, appeal and revulsion, it disgusts and then seduces in a way that brings to light our relationship with feathers and familiar but disconcerting forms.

You use feathers from pigeons - an animal often regarded as vermin. Would those pieces have the same effect if they were made from the feathers of a different bird?

Every bird I use is a common British bird; they are all overlooked, all considered vermin by some, yet they are all beautiful; ingrained in our consciousness, familiar yet strange. Take pigeons and doves for instance; you say pigeons are vermin, and yet they are exactly the same species as the dove, the same bird just different colours. Why then, is one more repulsive than the other? It is not the material itself but its cultural meaning. As an object, a feather is transient and fleeting, physically light and delicate yet laden with layers of meaning. A feather on the ground is treated differently from one worn in someone’s hair - it is living many lives, removed from its roots and yet we cannot separate it from its origins. This is also true of a feathered sculpture - we consider it differently in a new context but don’t negate its past, this is the stem of the mixed feelings of awe and repulsion. 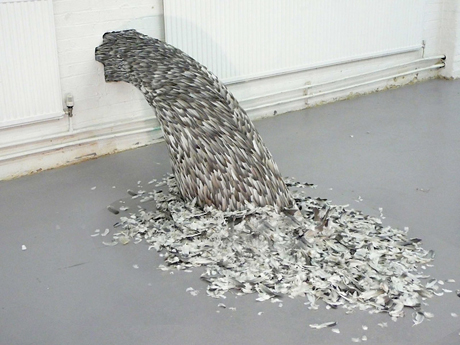 The House of Beasts show at Attingham Park, Shropshire is half way through - what sort of feedback have you had so far?

I have been pleased with the response from a diverse audience who may not have wholeheartedly celebrated the work at first, but who have come around and appreciated the work in the end. I think such is the power of contemporary art in an unusual setting. I felt the venue was particularly interesting in relation to my work; take the formality of Vex against the formal entrance hall, I have only ever seen it in a gritty environment and it was an interesting change, the columns and the architectural highlights changed the impression of the work. The history of the building also added further roots to the work. In its regency splendor, Attingham would have hosted a myriad of taxidermy birds, cases of avian jewels, a motionless history now revived as contemporary art in tension. 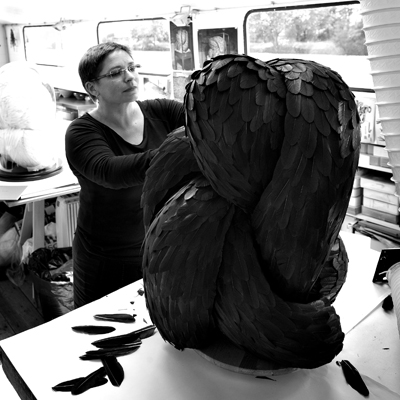 Artist Kate MccGwire at work in her studio

How far does the context of House of Beasts affect how your work is viewed?

The theme of the show guides the eye of the visitor - when searching for animal things, an animal gaze, if you will. Evacuate works well in the kitchen where you would not normally expect animals to be. Viewed as a creature, it is at once out of place and at home. It has movement and tension but is a memento mori of what has been. It also plays with your notions of what is acceptable: why is it ok to have a dead bird on the kitchen work surface but a live dog is unhygienic?

How do you feel your work sits alongside that of the other artists?

I am enjoying the interplay in relation to the other artists in the show and there are several to whom I feel an affinity: Mat Collishaw, Alastair Mackie and Tessa Farmer for their attention to detail, the quality of their work and its complexity. I also like Tom Gallant for his playfulness and intricacy. 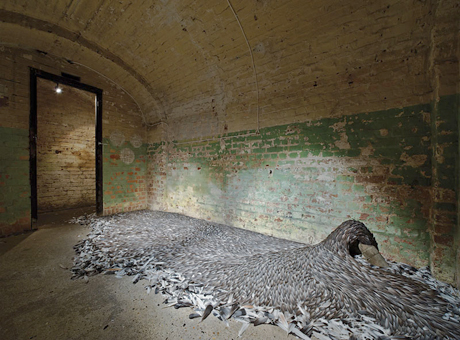