Daniel Meadows and one summer in the 70s

Val Williams, the editor of our rather fine Martin Parr monograph, is currently engaged in a massive and ongoing project to document British photography of the 1970s and 80s. As part of this she's curating a new show of work by Daniel Meadows from that era at the Ffotogallery in Penarth, Wales.

Meadows's photographs from 1970s Britain capture a nation still in thrall to the vagaries of the British seaside. Working with professor Williams, he's amassed a large amount of archive material including prints and negatives but also audio and video recording.

Many of the photographs in the show were taken in 1973 when Meadows toured the UK in a double-decker bus that also acted as his studio. Meadows connected with and worked collaboratively with the subjects of his photos, often interviewing them on tape as well as taking their photographs and the results are a fascinating glimpse into what seems literally like another universe.

Meadows says: "This exhibition is very much Val Williams’ project. She has selected all the pictures and decided how it should look. She sees what I did all those years ago as pioneering. She thinks that people today have something to learn from it.

"Travelling in the bus was an adventure which affirmed my faith in the basic decency of people. I was the recipient of a great many small kindnesses – the café owner who wouldn’t let me pay for my breakfast because he’d seen an item about the Free Photographic Omnibus on local TV news, thought what I was doing was good and wanted to support me; the Ministry of Defence policeman (called himself a ‘mod plod’) who followed me across Salisbury Plain with his blue light flashing and then pulled me over to tell me what a great project I had; the many people across the country who invited me into their homes, gave me meals and a bath; the willingness of so many to engage in conversation and share their lives. These were all reasons for feeling good about the human race." 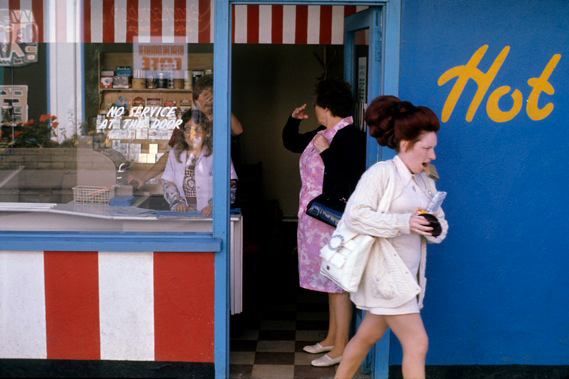 Daniel Meadows - from Butlins By The Sea