Ferran Adrià on the road (and in the air)

It seems fitting that when the world’s most innovative chef heads out on a promotional tour for his new book it’s not just in any old pair of wings. Such was the case when Ferran Adrià caught a de Havilland seaplane from Vancouver to Seattle over the weekend as he began his US tour in support of his new seven-volume opus elBulli 2005-2011. 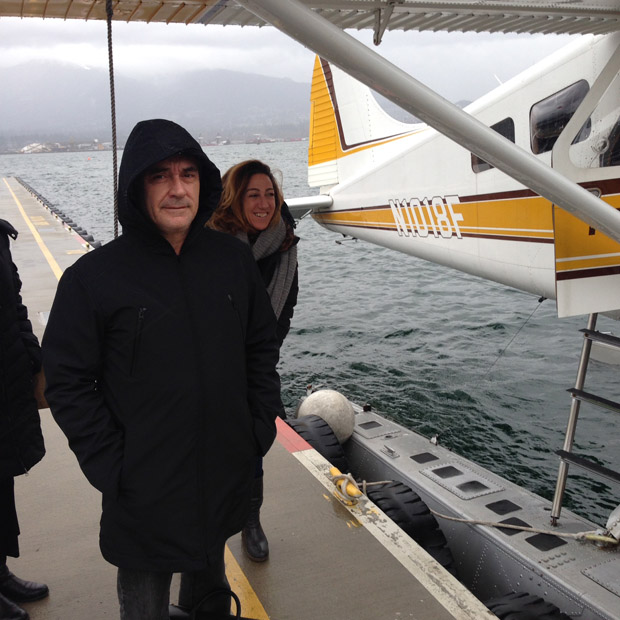 Ferran muffles up against the cold

On Saturday morning Ferran (pictured above with Phaidon’s Executive Marketing Manager Peter Tittiger, translator Sofia Perez and associate Gisela Rosell) flew from Seattle to Vancouver where he gave a lecture to a sold out audience of 150 people, holding them rapt with his plans for the elBulli Foundation, Bullipedia and his explanation of the meticulous decoding of his own creative process that formed the basis for the new publication.

After the talk he was approached by an elBulli collector, who'd flown in from Calgary and who had amassed a collection of 20 plates from the restaurant – some she’d purchased at auction at Sotheby’s in Hong Kong.  He also renewed his acquaintance with Jane Copeland, a former stagier At elBulli who is now a celebrated pastry chef at Mission Hill Winery in the city. 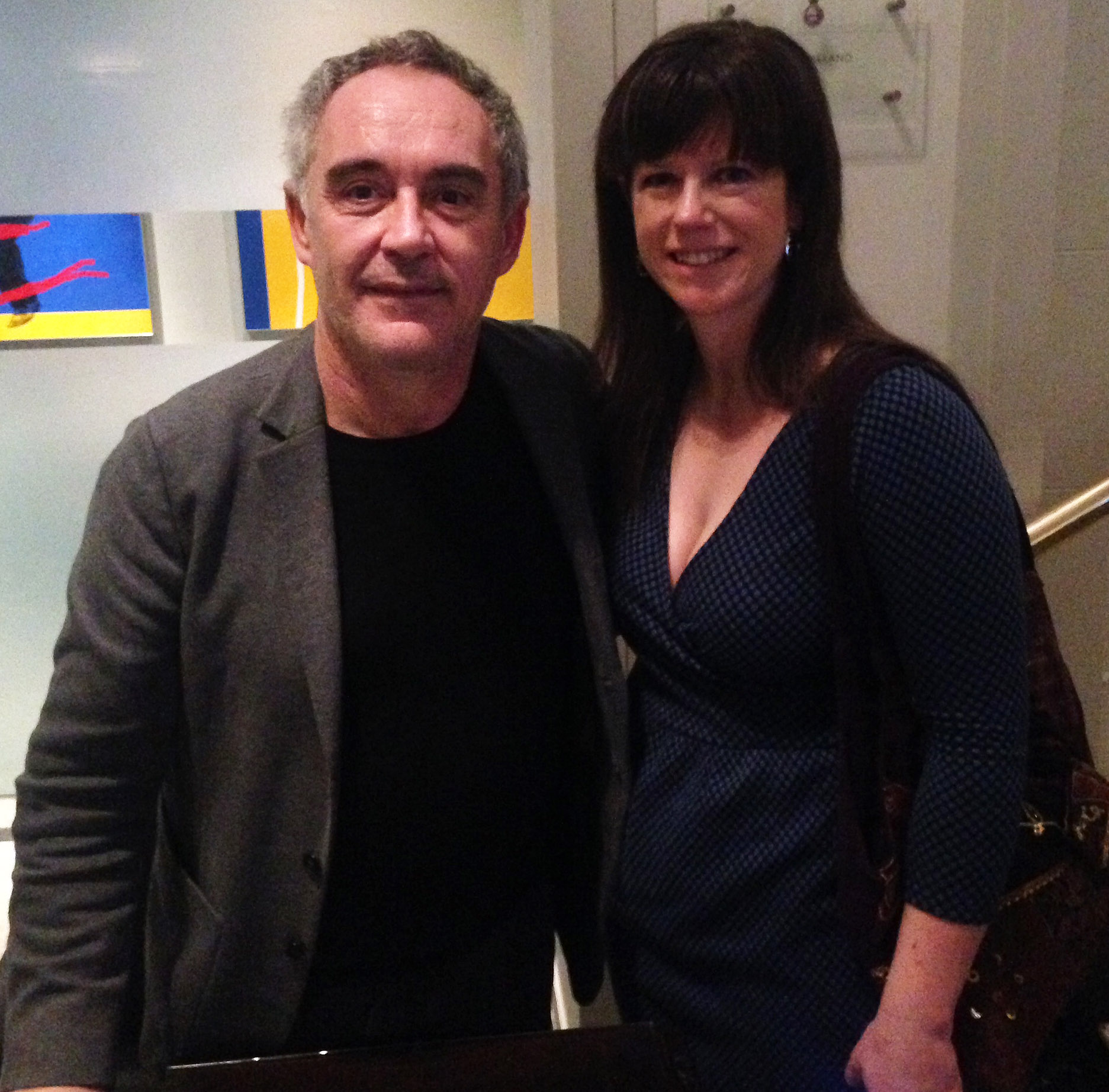 After the book signing Ferran hosted a smaller reception during which seven of Vancouver’s top chefs cooked a dish in his honour. One of them, Vikram Vij, covered his in silver, explaining to Ferran that in India, covering one’s dish in such a way is the highest form of respect. He later told Phaidon that each of the dishes sent out was covered in approximately twenty dollars worth. 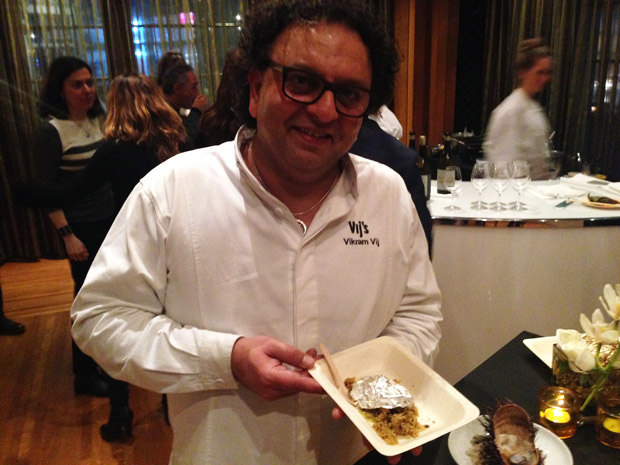 Ferran later met up with the Vancouver-based chef Hidekazu Tojo, The 64-year-old chef who is widely recognized as having invented the California roll. 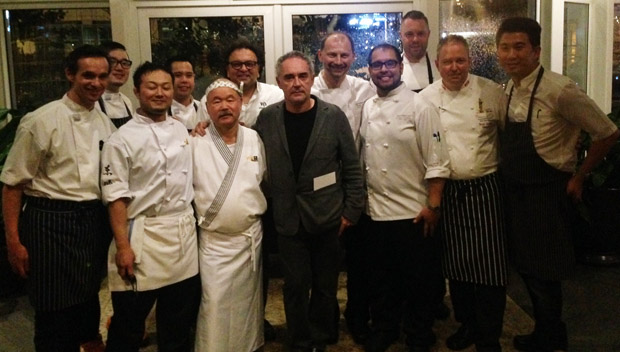 On Sunday morning Ferran hosted a press brunch at Barbara-Jo's Books to Cooks bookstore where he gave a lecture and was interviewed for Global TV by Nathan Fong, the presenter of Fong on Food. He was happy to catch up with Jefferson Alvarez the executive chef of the pop up concept store and restaurant Secret Location who he had met when Jefferson was working at Mugaritz. At Secret Location Alvarez is on a quest to bring the tasting menu back to Vancouver. 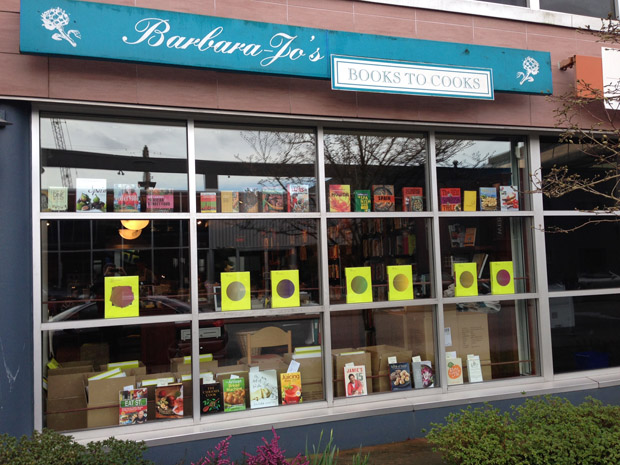 After that Ferran was back on the seaplane to Seattle and another event, this one catered by Renee Erickson, the creative force behind the restaurants The Walrus and the Carpenter – Seattle’s leading oyster bar - and The Whale Wins. 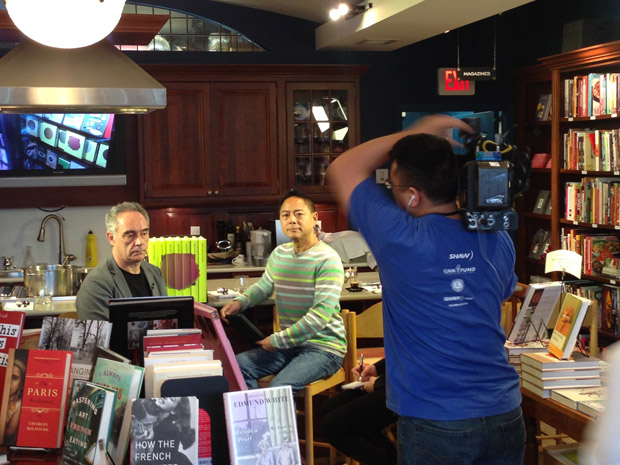 Then, last night (Monday) in Toronto it was the turn of Canada’s top restaurant Momofuku shōtō whose Mitch Bates introduced Ferran to a media-heavy sold out crowd and also introduced him to a new kitchen implement – a blow torch style gizmo called the Searzall which Ferran appeared transfixed by. 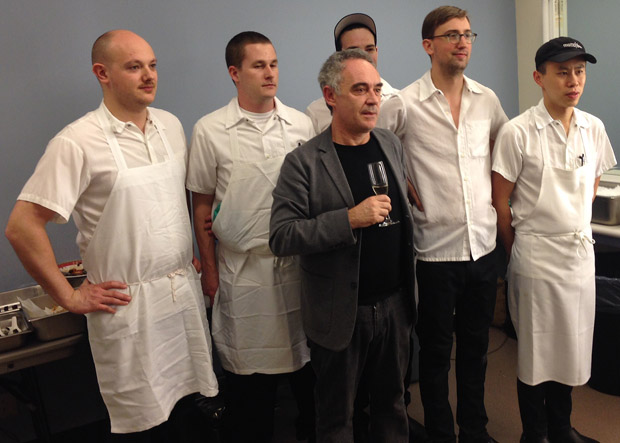 Ferran with the Momofuku shoto team

If you think Ferran might need a a bit of a break after all that you’ve obviously never met the man. This morning he was up with the lark spreading the love a little more over breakfast, unofficially regaling the team of Bosk, the restaurant at the Shangri-La hotel in which he’s staying with stories from the prime years of elBulli (that would be 2005-2011) – don’t be surprised if you see them awarded a Michelin star next year! We’ll bring you more updates from Ferran’s tour in the next few days. Thanks to Peter Tittiger for the photos. 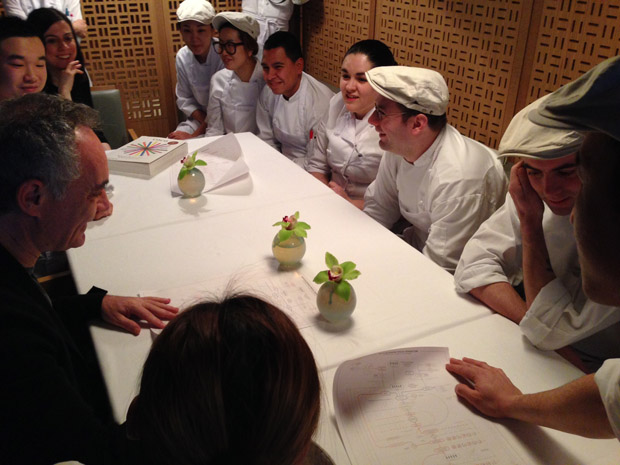