Who will save Michael Heizer's City?

Why does this storied work of land art need to be protected, before it is even finished?

Art conservators have to guard great works from a wide range of threats - from dry rot through to the ink in a vandal's pen. Yet we're pretty sure that no great works have ever been destroyed to make way for a missile silo, an oil well or a nuclear-waste dump. However, these are among the potential threats to Michael Heizer's City. The massive, remote land artwork was initiated by the American artist in 1972, out in the stretch of Nevada known as Basin and Range.

Heizer has in the past declared the site illegal to visit and threatened to have anyone who tried arrested and/or shot. In 2010 he said he would bulldoze the site if a proposed railway line to carry nuclear waste to nearby Yucca Mountain was built near it. In the end, the plan was scrapped. Art & Place, our recent book on land art describes a 2005 visit to the site by The New York Times and also reveals that recent satellite imagery of the site suggests the presence of numerous new and huge landscape forms on the site. 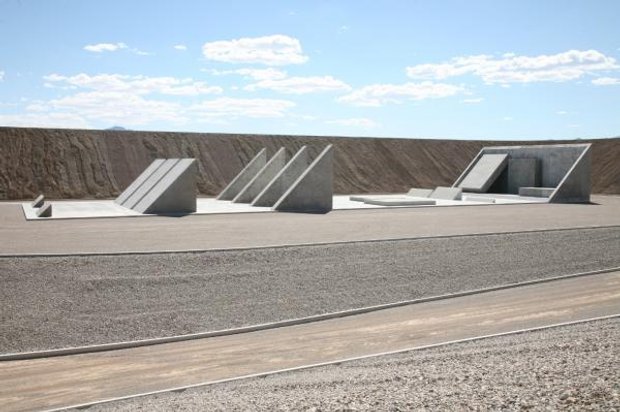 In fact, the mile long, quarter-mile wide complex of pits, mounds, dyed earth and cement slopes looks like a Donald Judd take on a Mesoamerican ruin. Heizer, who is better known for his recent LA work, Levitated Mass, began working on City a little over four decades ago, acquiring the tract of land parcel-by-parcel. He still yet to complete the work and open it to the public. Unfortunately, those familiar with this stretch of the Western United States fear that day may never come.

The pressure group, Protect Basin and Range, believe this wilderness could soon be exploited by energy or waste companies, and are pushing for the land to be awarded Monument status, which would protect it from any egregious, manmade changes. The Los Angeles County Museum of Art, the Museum of Modern Art, New York, the Institute of Contemporary Art, Boston, and the Walker Art Center have all backed the campaign.

In a post on its Unframed blog from earlier today, LACMA writes, “as with many of Heizer’s greatest works, the sculpture is incomplete without the surrounding landscape. The solitude of City is part of its power. To have the surrounding land developed into anything would severely impact Heizer’s work. To see the land developed into a site for military, energy, or waste purposes, would ruin it forever. After 43 years of work, can it really be destroyed like this?"

It's strange to think that a work like this might need protection, before its completion, yet Heizer's magnum opus certainly sounds like the sort of thing future generations will cherish. For more on the campaign, go here; and for a greater understanding of City and other works like it, get Art & Place, our brilliant survey of site-specific art in the Americas.