What has London practice Ordinary Architecture done to this landmark, as part of LA's On The Road project?

It’s an image befitting the home of American cinema: an assortment of 14-metre-high Hollywood sign letters that appear to have toppled from the famous landmark, littering the roadside of Mount Lee. Yet, these aren’t props from a new disaster movie, but instead the work of British practice Ordinary Architecture, who’ve contributed to LA’s On The Road project, a year long series of works and conversations that seeks to highlight contemporary architectural practice in Los Angeles.

Rather than design or build something for the show, Ordinary Architecture, which was founded last year by former FAT director Charles Holland and his colleague Elly Ward, has chosen to mock-up a wrecked version of the Hollywood landmark. The work, Falling Icon, doesn’t seek to desecrate the sign. Instead, the architects explain, “our installation attempts to satisfy the desire of every visitor in their impossible mission to reach the elusive sign,” which has been fenced off since the 1980s. 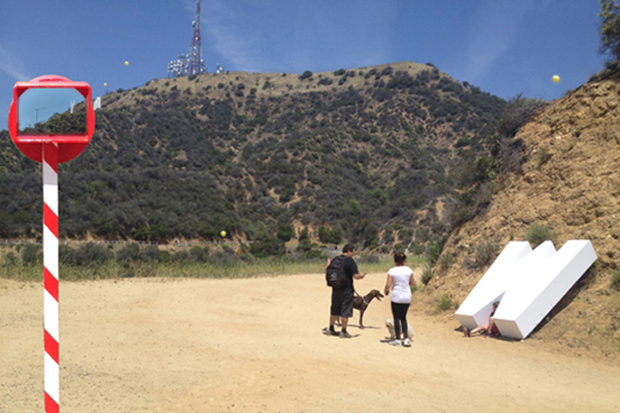 Ordinary Architecture has also installed a series of adapted viewfinders, pointing at the hillside, which appear to show certain letters are missing from the landmark. A distressing sight for LA traditionalists, but also a thought-provoking one for a city alive with cinematic and seismic activity, and perhaps with a richer history than casual visitors might realise. 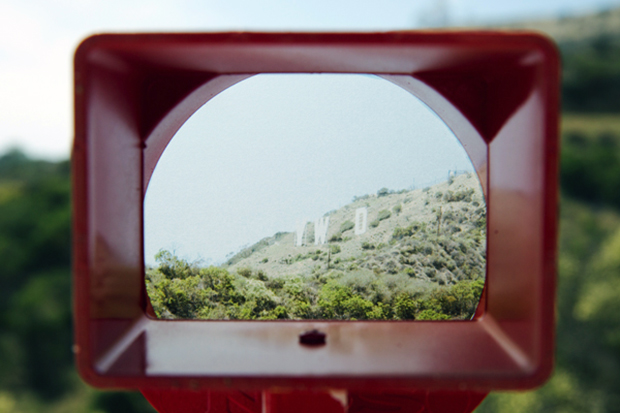 For more on the story go here. For a great guide to LA, architecture and all, pick up a Wallpaper guide, and for more permanent, site-specific works in the Americas, take a look at Art and Place.