US history, set into stone

Arizona's petroglyphs at Canyon de Chelly depict life before Europeans arrived, and after

There is nothing quite like art made for a specific site, in terms of boldness, spectacle and uplift - hence Art & Place's survey of site-specific art in the Americas. Every page is like flinging open a window on a modern wonder of the world, be it vast, commissioned frescoes, plazas and fountains, church interiors or large-scale conceptual works.

Although site-specific pieces by artists such as Robert Smithson have become a staple of modern practice since the late 1960s, it is in the images of Canyon de Chelly, in Apache, Arizona, that we discover that this is a genre with a history that stretches back millennia. Some of the rock art in this canyon dates back to the period of the "Basketmakers", a tribe of people who were forerunners of the Anasazi Indians. The works shown here depict a strange series of short-limbed anthropomorphs and animals and were created around 1000 BC. 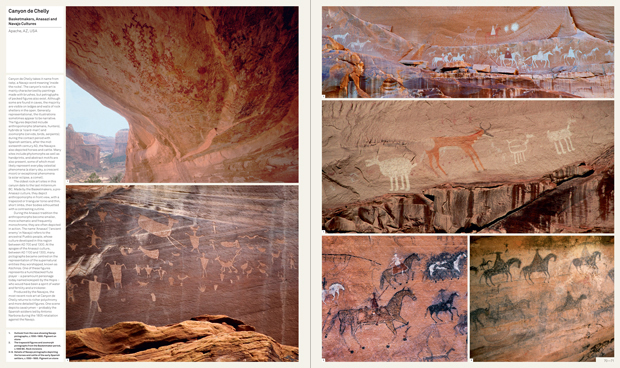 This was but the first example of centuries of rock art to come - over the next two thousand years, the Anasazis developed these motifs, introducing action sequences and pictographs depicting the supernatural beings they worshipped, richer in detail. By the 16th century, the arrival of Spanish settlers was marked by renderings of the new arrivals on horseback. By the early 19th century, these are dark and silhouetted figures, the scenes depicting here probably representing the soldiers led by Antonio Narbona during the bloody 1805 retaliation against the Navajo who had conducted raids on Spanish military posts to try to recover their grazing land. These narrative sequences represent the marks of history - art, life and the environment merged.

Intrigued enough to learn more about this and other works? Then allow our editor, Rosie Pickles to introduce you to the title. You can also browse through a selection of images, here, or simply buy a copy of the book, from the people who made it, here.