NYC to lose one of its most familiar works of art?

“There is something so incredibly cosmically magical about curtains,” said the film director David Lynch in a recent interview, “opening and revealing a new world. It resonates on a deep level with people.”

Perhaps similar thoughts occurred to some of the seven million international passengers who walk past Harry Roseman's Curtain Wall sculpture each year. These 85 white, gypsum curtains set against a Wedgewood blue the wall of the arrivals corridor in New York's JFK's international Terminal Four. They were commissioned from the artist by the airport in 2001 and over the past 13 years they've welcomed travellers walking from their flights to the airport's customs hall. 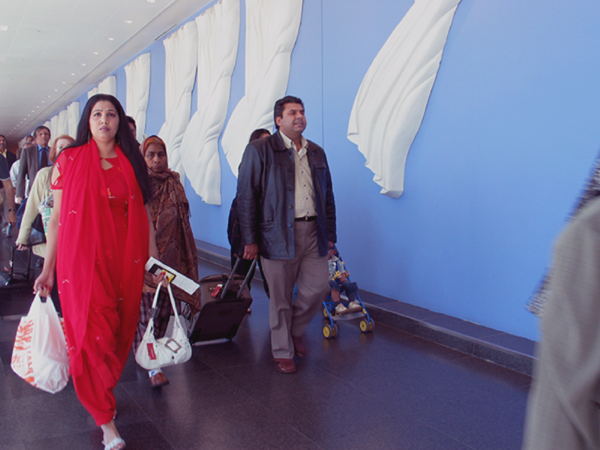 Yet this is about to change. As the New York Times reported yesterday, “J.F.K. International Air Terminal L.L.C., the private company that developed and operates Terminal 4 — and that commissioned and owns the sculpture — plans to remove it permanently, probably no later than this spring.”

The firm has no sweeping redevelopment plans, they simply wish to widen the corridor, and by removing Curtain Wall and its protective curb they could enlarge the its width by a little over 30 centimetres.

“Unfortunately, given the significant increase in passenger volume over the last decade, the physical limitations of the walkways at Terminal 4 compel us to find a new home for Harry Roseman’s incredible piece,” said Alain Maca, the president of the development and operating company.

Finding such a home seems unlikely for a site-specific sculpture about four metres high and nearly 200 metres long. While we appreciate that the care and convenience of its passengers is JFK's first priority, this minor physical improvement seems to come at a high aesthetic cost.

As Mr Roseman told Phaidon via email, “When JFK-IAT, International Air Terminal, Terminal 4 was conceived the people involved in the financing, building and conceptualizing of the terminal had a vision. This vision had to do with the nature of arriving in the United States and in New York, many coming to the United States for the first time. They had an idea about that first experience, that disembarking would be an event, exhilarating, both visually and thoughtfully. That people arriving in New York City, one of the art capitals of the world have major art works to experience as they walked down those corridors towards customs and then proceeded into the city. It was an optimistic and generous vision and one that treated customers as people. That vision seems to have dissipated.”

We echo Mr Roseman’s sentiments and certainly hope a way can be found to keep Curtain Wall. For more on this story go here. For a greater understanding of site-specific art in the Americas, consider our book Art & Place.