The US TV journalist and talkshow host, Charlie Rose, is more used to interviewing the likes of Johnny Depp and President Obama, so you might have wondered whether grappling with the hard-to-describe, difficult-to-photograph works of artist James Turrell could have lead to a little dead air. After all, Turrell's luminous, numinous light installations - loved by Phaidon.com and gallery-goers across the world - require some time and effort on the part of the viewer (and can be a little challenging to describe).

So, it was good to see that Rose and Turrell really clicked during the artist's recent appearance on the American TV talk show. Turrell was there ostensibly to promote his trio of summer retrospectives, at New York's Guggenheim, The LA County Museum of Art and The Museum of Fine Art in Houston. 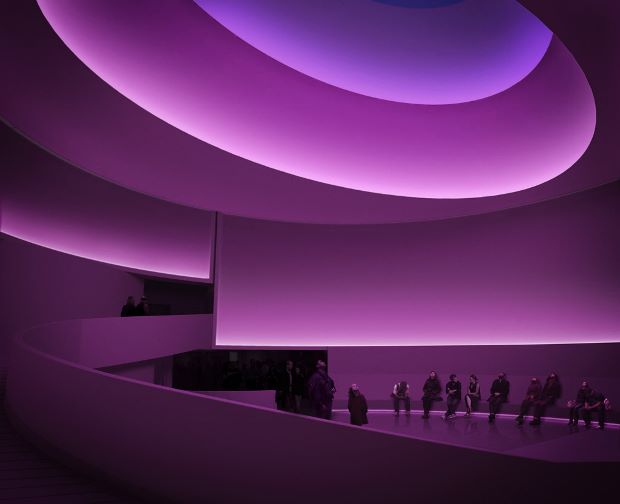 Aten Reign (2013) at The Guggenheim, by James Turrell

Turrell did discuss Aten Reign (2013), the crowing installation from his Guggenheim show, which fills the museum's rotunda - designed by Frank Lloyd Wright - with light. "I think it's glorious," Turrell said, "and I think he (Wright) would like it."

The artist also explained why he needs three museums for his 48-year retrospective. "It's only 23 works," he said, quicly adding that these are "works that luxuriate in space, and it takes a lot of space to do that."

However, the really interesting parts of the exchange came when Turrell described his working life in closer detail. He paid tribute to his aunt, Frances Hodges, a New York magazine editor, who introduced him to the city, taking him to see both Monet's Water Lillies and the early electric-light art pioneer Thomas Wilfred's Clavilux creations. "Who was this strange guy who made this light in a box?" Turrell recalls wondering, "I thought, you know, that looks like our time."

Turrell went on to discuss the nature of light, citing recent experiments which appear to indicate that the behaviour of light changes depending on whether we are observing it or not, and that, as humans, we are, in a sense, light eaters, since we synthesize vitamin D when exposed to sunlight. Interesting stuff for prime time TV.

In all, it's an illuminating (no pun intended) interview with an artist who, despite making hard to comprehend works, speaks clearly and frankly about his output. To view it in full, see below. For more on Turrell consider our book, Art and Electronic Media, which features Turrell, alongside the likes of Jenny Holzer, Bruce Nauman and Mario Merz among many others, including Turrell's early inspiration, Thomas Wilfred. Buy the book here but before you do take a look at our Phaidon Club scheme through which we try to bring our most interested (and interesting!) readers further into Phaidon world through author events, partnerships and access to signed books and premium content.