The pioneering land artist Nancy Holt has died after a long ilness. She was 75. Holt, whose work is featured in our books Art & Place Site-Specific Art of the America and Land and Environmental Art had been in hospital in New Mexico since October. As well as creating huge land works such as Sun Tunnels in the Great Basin, Utah she also made short films.

Her final project was editing The Making of Amarillo Ramp (2013), a film currently on view in the exhibition “Robert Smithson in Texas” at the Dallas Museum of Art. Holt, who was married to Smithson, apparently worked on the edit of the film in the hospital.

“She was the nicest, kindest, warmest person imaginable,” said critic and curator Phyllis Tuchman, who had known Holt and Smithson, for decades.

Shot with a Bolex camera on 16mm color stock film in 1973, the piece chronicles the creation of Smithson’s only Texas earthwork, a huge crescent of sandstone rock that once emerged from an artificial lake. Holt, along with Richard Serra and art dealer Tony Shafrazi, completed the ramp, which was unfinished at the time of Smithson’s death, in 1973. 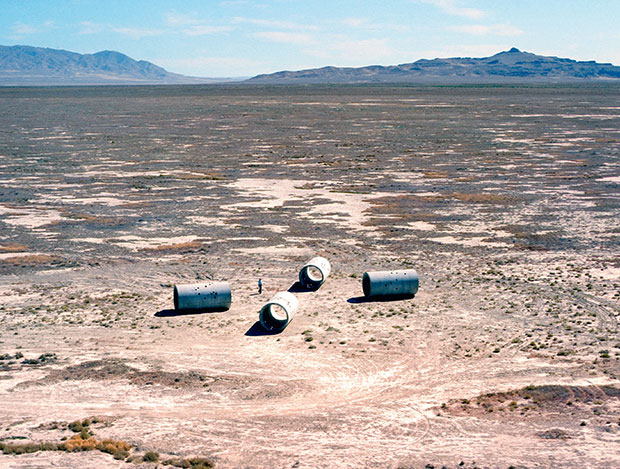 “The film is absolutely astonishing, unbelievable,” said Tuchman, who worked closely with Holt in recent years as she planned Robert Smithson’s New Jersey, which opens on February 23 at the Montclair Art Museum. ”It’s a major contribution to American art history of the last 50 years.”

Holt grew up in Clifton,  New Jersey and first encountered Smithson while at school, coming together again in New York in 1959. They worked together up to Smithson’s death in a plane crash at the age of 35. Holt went on to manage Smithson's legacy. “It wasn’t that she just kept the flame alive, Nancy was actually part of the work," said Tuchman.

Holt was recently the subject of a travelling retrospective, Nancy Holt: Sightlines. The exhibition included collaborative videos such as Swamp (1971) in which Smithson verbally guides Holt and her camera through a wilderness and Boomerang (1973), which she made with Richard Serra. Her best known piece, Sun Tunnels (1973–76), comprises four, 22-ton concrete pipes, each measuring 18 feet and lying in Utah’s Great Basin Desert. The piece is oriented toward the sunrises and sunsets of the winter and summer solstices.

The tops of each tube are perforated so that when sunlight enters them the constellations Draco, Perseus and Columba are projected inside. After she finished the piece, Holt camped out in a VW van, photographing and writing up the effects of the light on her sculpture. 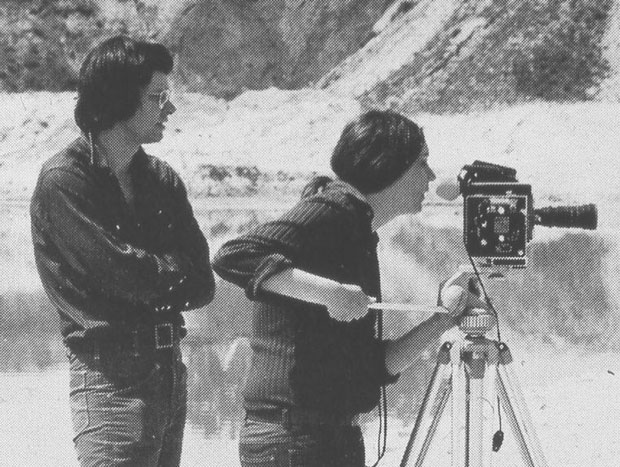 Nancy Holt on location with her husband Robert Smithson

“I would watch sunrises and sunsets and the stars at night, which were incredible – you could get lost in them,” she told The Daily Telegraph in 2012.  “When you’re alone in the desert, you’re ageless, timeless. You start to lose a sense of being contained in your body.”

Sun Tunnels, is of course, one of the many art works featured in Art & Place Site-Specific Art of the Americas. Part of the entry for Holt's art work reads: "Situated in the Great Basin Desert, which lies between the rocky mountains and the Sierra Nevada range, this work is 40 miles from the nearest active town. Four large cylinders are arranged on the ground like an open X.

"The work is made complete by its interaction with the sun and stars. The tunnels are aligned with the sunrises and sunsets on the summer and winter solstices. Twice a year, at their respective dawns and twilights, each circular tunnel frames the circle of the sun and becomes ablaze with golden light. The sun seems to exit for a few minutes at the viewer's level, sitting on the horizontal plane of the dessert as it communes with the viewer through Holt's cosmic conduit.

The artist drilled a series of holes into the top half of each tunnel in the configuration  of stars in a particular constellation, each tunnel with a different constellation. During the day, sunlight casts the stellar patterns on the curved floor of the tunnel's shadowed interiors. like neolithic monuments from millennia past, Holt's sun tunnels do not exist simply as sculptures in and of themselves, but act as vehicles that connect the viewer to the larger cosmos."

For more on land art, check out Art & Place Site-Specific Art of the Americas in our online store and read an interview with its editor, Rosie Pickles, here. You may also like to consider our book Land and Environmental Art.