In 1968 land artist Michael Heizer drew a sketch of a rock balanced above a trench and named it Levitated Mass. Then he waited. As the decades passed friends, and sometimes strangers, would alert the reclusive artist to rocks that resembled the one in his sketch. None quite fit the bill. He worked on other projects, famously Complex City (1972-76), a third-of-a- kilometre-long work constructed from concrete, steel and compacted earth in the Nevada Desert. 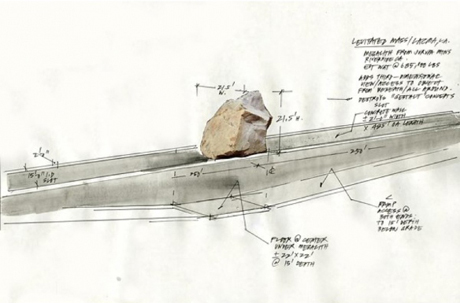 Then, in 2005, a quarry owner in Southern California called him with some news, “I’ve found your rock.” The 340-ton piece of granite in question, hewn from a quarry in Riverside, was the perfect manifestation of the one in the sketch Heizer drew in 1968. The artist paid $70,000 and the deal was done. Yesterday, it began its slow journey from Riverside to the Los Angeles County Museum of Art.

The rock is being moved at a cost of $10 million (privately funded) and a speed of five miles an hour on a 30-feet wide transporter used to move houses and rockets. It’s due to complete the 105-mile journey and reach LACMA in the early hours of March 10. The piece will go on show in early summer. 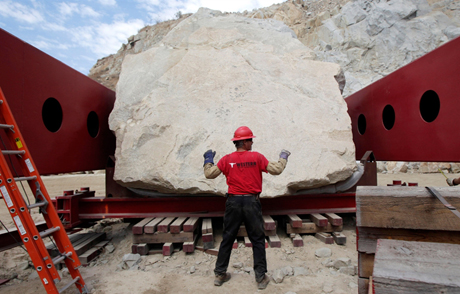 A 456 long trench has been excavated in the grounds behind the museum’s Resnick Pavilion, over which the rock will hover, balanced on two concrete shelves.  As visitors walk along the slot, it gradually descends to 15 feet deep, running underneath the megalith, which appears to levitate, before ascending back up. 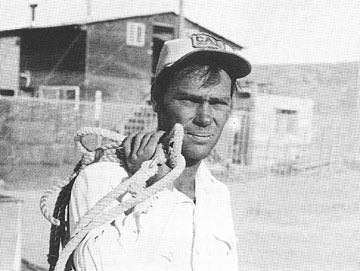 As with other works by the artist, such as Double Negative (1969), the monumental negative form is key to the experience of the artwork. At 340 tons, the boulder is one of the largest megaliths moved since ancient times. Taken whole, Levitated Mass speaks to the expanse of art history, from ancient traditions of creating artworks from megalithic stone, to modern forms of abstract geometries and cutting-edge feats of engineering. 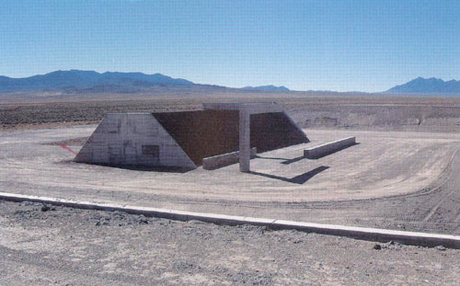 Heizer was born in Berkeley, California, in 1944 and briefly attended the San Francisco Art Institute before moving to New York City in 1966 where he produced large-scale paintings. In late 1968–69, he chose to operate between his studios in New York and a ranch in Nevada. Here, he began to produce large-scale sculptures as well as large earth drawings and paintings on dry lakes in California. To interpret such immense sculptures in a gallery setting, he developed a kind of large-scale still photography in the form of collages and static projections.

LACMA says it expects Levitated Mass to “contribute to a long-term economic impact in Los Angeles, and, much like Chris Burden’s Urban Light, become a “destination artwork” for local, national, and international audiences.”