The Binishell is a cheap, quick and, its proponents say, environmentally friendly building solution

There have been plenty of efforts to come up with new, cheap, quick and environmentally friendly building techniques, yet few have involved concrete. The Binishell system bucks this trend. Its buildings are created by pumping wet concrete onto an inflatable dome, reinforced with steel. Once the concrete has set – which takes about an hour – the inflatable dome can be deflated to start on the next Binishell.

The Binishell actually dates back to the mid-1960s, when Dr Dante Bini came up with the concept. Since then, about 1600 of the domed structures have been put up in 23 countries, some as big as gymnasia, others as small as cabins. 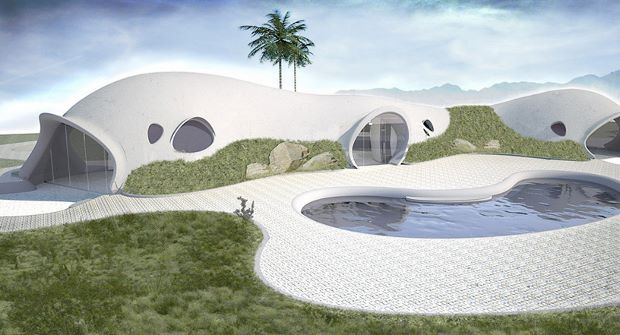 Now Bini’s son, Nicoló Bini, is giving the idea an extra push and repositioning it as a cheap, modern building solution. “With 25 per cent of the world’s population living in sub-standard shelters, this is where we feel we can have the most impact,” says Nicoló.

He claims the domes cost about $3,500 to create, and points out that some of the existing Binishells have withstood very harsh climates. “Binishells have survived even extreme environments - such as the lava, ash and constant earthquakes on Mount Etna - for almost 50 years.” Indeed, they’re designed to be permanent, unlike most quickly built disaster-relief constructions, such as the Ikea Foundation’s flat-packed shelters.

Concrete’s ecological impact is mixed, and it can be ugly if it’s used poorly, but the Binishell brings a pleasant aesthetic quality to the material. What’s more, Nicoló says his scheme has other benefits.

“Utilizing locally sourced materials and labour, Binishells help to build up the local economy while building up the local infrastructure,” he claims. Let’s hope this is one housing bubble that doesn’t burst. For more on this go here. For greater insight into the possibilities Bini’s chosen material offers, take a look at our Concrete book, and for more on contemporary construction, sign up for a free trial of the Phaidon Atlas.