Even casual phaidon.com readers will know how interested we are in concrete. The material is a delight in its natural form, but it takes colour well too, in the right circumstances. And for a concrete office building on an island off South Korea, local architects [Mass Studies](ean based architecture firm that was founded in 2003 by minsuk cho in seoul. the studio recently finished the design of shop for fashion retailer ann demeulemeester. the building consists of four levels, the shop, a multi-store and restaurant on the top floors. the project's facade is made from a geo-textile planted with herbaceous perennials to form a living wall. the greenery is carried into the shop, incorporating nature whenever possible. the studio focuses on issues involving density and living in urban korean areas. the sh) dyed it ochre inside and out. The idea was that the warm colouring would make the building inviting, and would pick up the hues of the island’s volcanic landscape.

Mass Studies, led by Minsuk Cho, have been reliably innovative for some time now, (it recently covered the exterior and interior walls of a shop for fashion house Ann Demeulemeester with turf) and this HQ for local internet company Daum Communications is no exception.

The location is the island of Jeju, which hopes to become the country’s own Silicon Valley. Daum wants to relocate a quarter of its 1,500-strong workforce from Seoul to Jeju – once a destination for honeymooners – to help cut down their commute time of three hours a day. 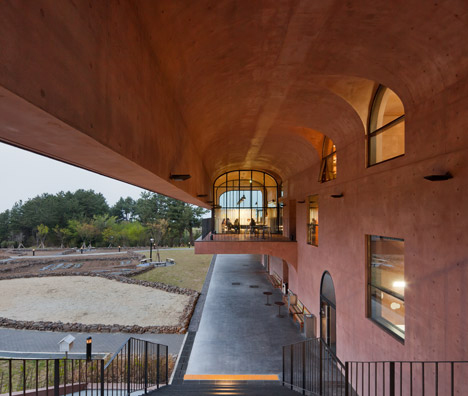 So rather than give them a conventional office tower, Mass did something more in tune with the staff’s more rural surroundings: five-storeys of gently curving modules with floor-to-ceiling glazing framed by that pinkish concrete.

“We weren’t interested in building a high-rise,” says Cho. “The company wanted something that was only possible here and not in Seoul, to entice employees who were hesitant to move. Also, we realised that high-rise offices aren’t interesting socially. They can often be suffocating, with their big curtain wall and artificial ventilation; you spend most of your time there, but there’s no spatial quality.” 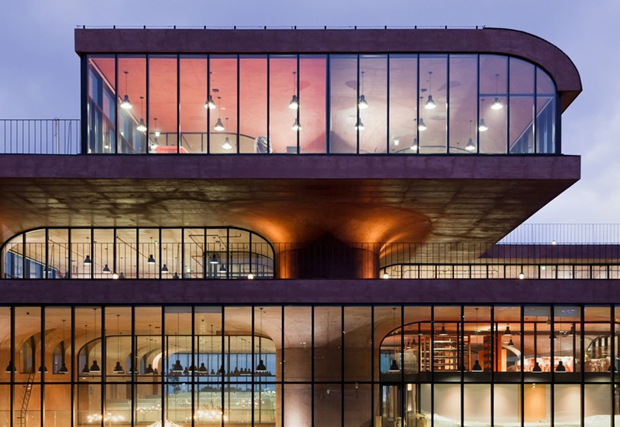 Cho also wanted Daum’s brave venture to be an antidote to the latest novelty workplace interiors, so popular with dotcoms. So there’s not a single slide or swing or bit of in-door turf in sight. Instead, the interior walls are pure smooth concrete with not a single decoration. To describe it as refreshing is an understatement.

“We looked at the Google and Facebook headquarters,” says Cho. “These are offices where the architecture virtually disappears. They have these funny rooms and novelty things like slides, but often they don’t consider the architectural quality at all.” 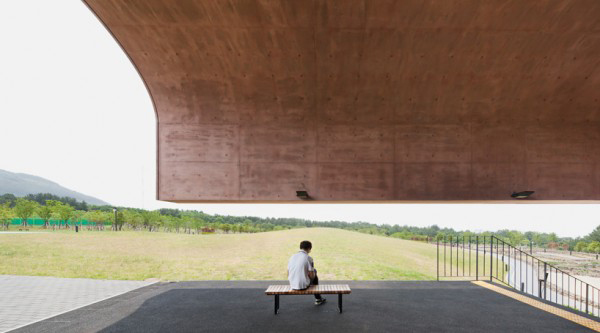 If it works, and Daum entices enough of its employees out of the populous capital and over to tranquil Jeju, then it has significant ramifications for Seoul and even South Korea’s society, Cho believes. “I think it will be an important part of Korean history, this reverse migration,” says Cho. “It’s a very brave move, and it sounds almost anti-urbanistic, but it’s important to understand it in the context of Korea. It’s not just a practical issue,” he adds, “it also contributes to Korea’s long problem with centralisation. It is a social experiment.”

Naturally you can see some more innovative and interesting concrete buildings and structures in our book of that name.