Despite his international standing, not all of Steven Holl's architectural proposals are ushered through. His recent mixed-use proposal for a site in Moscow, just across the river from the Kremlin, was one such project that didn't get off the drawing board.

Holl had envisaged a cluster of ‘spatial ribbons' and "a plastic composition of space-shaping architecture between historical buildings”. The scheme, for a design competition initiated by developer Capital Group, included housing and a hotel, alongside cultural, commercial, recreational and public space.

Capital Group, which has a number of Moscow schemes, plans to develop a historically significant three-hectare site called Golden Island, on the riverside territory of Sofiiskaya Naberezhnaya across from the Kremlin. 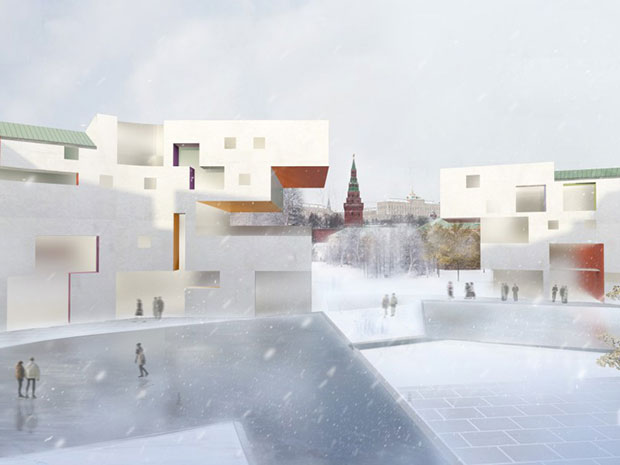 Holl's irregularly-shaped white boxes would have been stacked in a random pattern, leaving geometric voids within and between. The roofs were envisaged in verdigris green copper. The architect's design even made references to the rainbow colours of the onion domes of the nearby Cathedral of Vasily the Blessed, built by Ivan the Terrible in the 16th century. Known as St Basil’s Cathedral, it is now a museum. Hence the brightly-hued ceramics which would have  lined the sculptural openings in the white facades. 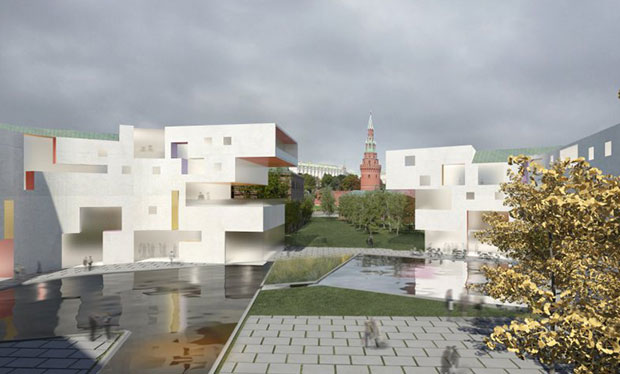 Holl, who well known for his practice’s striking geometric structures, (such as the 2003 Simmons Hall at MIT in Cambridge, Massachusetts) envisioned this as a place for all seasons. So the pools at the central public area between the hybrid buildings would have frozen over into an ice-rink in winter.

Meanwhile, a pedestrian bridge to the Golden Island would have housed a music pavilion floating in the Moscow River, which would connect to the history of the site’s former Mariinsky School.

Sadly, it wasn't to be. Despite the engaging nature of the competition entry, first prize went to a more conventional-looking scheme from Moscow firm Sergey Skuratov Architects. Still, something that has met with everyone's approval is our new Holl monograph. To get a deeper understanding for this great architect you can buy it here. Meanwhile, for a close look at a couple of Holl's idols, consider these Le Corbusier books; and this Louis Kahn book. 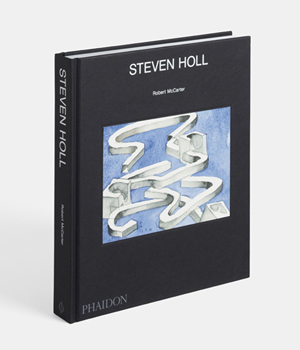 More on Steven Holl comes to a halt in Moscow