US Architect Steven Holl and his practice seem to have a Chinese project in the news almost every week. A few days ago we brought you news of his Link Hybrid Towers in Beijing. Now, we bring word of by his latest East Asian undertaking: a truly extraordinary pair of museums for Tianjin, the so-called Eco-City being built built two-hours drive from the capital.

This seaside conurbation – a joint venture between the Chinese and Singaporean governments - is going up on the reclaimed salt pan and tidal flats of Bohai Bay, beside the north eastern Chinese coast. Once complete in 2020, it will be home to around 350,000 residents. So far, progress has been good; a third has been completed, with significant contributions made by such notable firms as von Gerkan, Marg and Partners Architects (gmp), Goettsch, MAD, Atkins, Perkins Eastman, and Holm Architecture Office.

Holl, perhaps best known for his incredible, boxy-yet-biological-looking residential complex, Simons Hall (2003) at Massachusetts Institute of Technology, has put forward an equally cerebral plan for Tianjin. The Ecology Museum will feature exhibits on the galaxy’s evolution, earth’s biology and the development of the human race. “Visitors proceed through the three ecologies in a descending procession of ramps: Earth to Cosmos, Earth to Man, Earth to Earth,” the firm explains.

Meanwhile, next door at the Planning Museum, visitors will be able to learn more about technology and development, with displays covering transport, infrastructure, architecture and industry. In a temporary exhibition area, the Eco-City also gets to trumpet its achievements with a large-scale model of itself on display. 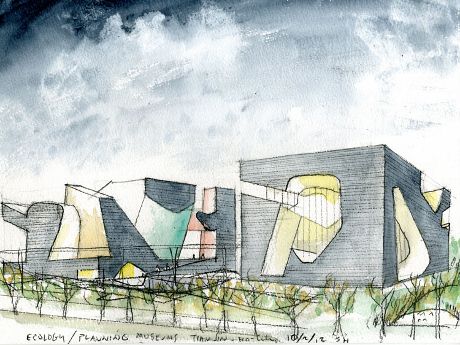 Holl has made the most of these contrasting subjects, by introducing a yin and yang theme. The Chinese symbol for universe’s inherent natural balance is a good fit, as, according to the architect's brief, “The Planning Museum is a 'subtractive' space, while the Ecology Museum is an 'additive' complement.”

In prosaic terms, the Planning Museum is cube-like, with  irregularly shaped holes cut out of it, while the Ecology Museum mimics the shape of these holes. Holl, in a similarly highfalutin  style, calls the latter “a reversal of the space carved out from the Planning Museum. Like the Chinese ‘Bau Gua’ or ‘Yin Yang’, these forms are in reverse relations.” Be sure to drop these words into casual conversation, if you ever get to visit, seven years from now. Once complete, both buildings will have roof gardens, and an adjacent public square, as well as a high-speed tram link, connecting the yin and yang museums to Tianjin’s business quarter.

For more on the story, see Holl's own site, or this great Dezeen story. For further reading on today's most ambitious building projects consider our Atlas of 21st Century World Architecture, an indispensable guide to 1,000 of the most outstanding works of architecture built since 2000. 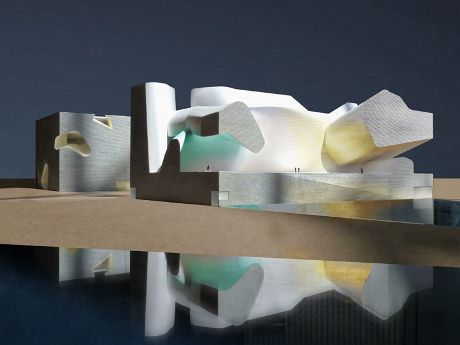