My Body of Art - Zhang Huan on Mountain

To Add One Metre To An Anonymous Mountain is one of his more restrained works, here he talks about it and others

When contemporary art fans talk about the use of the body in art, the name Zhang Huan is usually one of the first to crop up in the conversation. His Nineties work in particular was so intense, so visceral and out there it's hard not to feel awed by this Chinese artist who really pushed the boundaries of what was possible, acceptable and, indeed desirable, in performances highlighting the human body and its limits.

Zhang Huan pushed those limits perhaps more than any other artist, famously covering himself in honey and sitting naked in a fly-infested public toilet or challenging the art world with works that saw him suspended on hooks and dunked in rivers, tied naked to horses, lying naked, face down, on blocks of ice, or bathed naked in showers of sparks generated by a metal cutter, or dangled from trees in public parks, off the roofs of buildings and from all manner of hook-like contraptions across China. He invited caligraphers to cover his body in fables, phrases and proverbs until there wasn't an inch of skin left visible and even incorporated sheep, donkeys, dogs and hens into his practice. Here was an artist who truly tested his body's limits.

He is represented in our new book, Body of Art, via his relatively restrained - though no less interesting - 1995 piece To Add One Metre To An Anonymous Mountain. "To Add One Meter was inspired by an old saying, 'Beyond the mountain, there are more mountains'" Huan explained at the time. "It is about humility. Climb this mountain and you will find an even bigger mountain in front of you. It's about changing the natural state of things, about the idea of possibilities."

Huan’s associate Kong Bu remembers the creation of the piece: “At 13:00 on May 11, 1995, only the occasional truck along the highway disturbed the calm atop the mountain. Surveyors Jin Kui and Xiong Wen stood on the road below where they set up their equipment. They measured the mountain's height at 86.393 meters. I was in charge of recording each participant's weight. Everyone climbed the mountain, and one by one the artists shed their clothes. The participants divided into four rows by ascending weight and then lay on top of each other in the form of a pyramid. Between 13:26 and 13:38 that afternoon, the surveyors' measurement of the anonymous mountain was 87.393 meters, precisely one meter higher than Miaofengshan Mountain. The works of this period were extremely masochistic, showing Zhang Huan's abnormally excited posture and a wisdom and romanticism hinted at by his extreme bodily language.”

In our Contemporary Series Artist book Huan speaks about treating his body as a separate country in itself, a superpower stronger than China. When we chatted to him about his inclusion in Body of Art a couple of weeks back, we asked him to expand on this. Here's what he said. 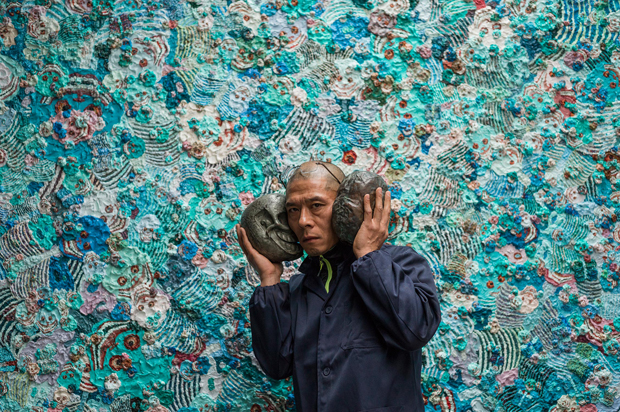 "It makes me feel dependable to use the body as a medium of art creation. I realized that the body was the most direct way to contact with society as well as a proof of one’s personal identity. In this regard, the physical body is the carrier of my inner heart."

Many of Huan's performed works, of course, involved intense physical pain. In 65 KG Huan first cleaned his living space and then sewed together around one hundred white sleeping mats. He laid out nearly twenty of these mats with a few precise centimeters between each so that they filled the floor of room. In the centre of the room, he stacked several dozen mats to form a platform resembling a bed. He placed an electric hot plate on the platform then topped it with a white steel pan of the type seen in hospitals.

Naked and gagged, Huan was then winched up and suspended from chains secured to an iron plank three meters above the centre of the room. A leather strip held his head in place. Then two doctors began to draw blood from his body. To heighten the sensation for those lucky enough to be invited, the room had been sprayed with disinfectant before the performance began. The scent filled the room. But as Zhang Huan's blood flowed from his body and into a bag held by one of the doctors and then dripped from the bag onto the pan on the hot plate, the scorching drops of blood bounced into the air, their scent gradually diffusing. 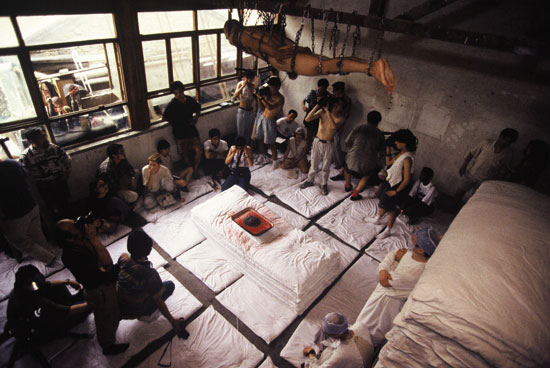 So what went through his mind at times like that and how did he overcome the pain involved in these early art works?

"During the time when I had to make the piece, it was my only choice to overcome the pain. It was the only way my mind could feel peaceful. I felt as if I was facing a giant thing and wanted to push it to the ground, although it was impossible. In the course of the hour, I tried to forget myself and separate my mind from my flesh, but I was pulled back to reality again and again. Only after the performance did I understand what I experienced.

"But really, at those times my inspiration was from the most trivial things in life such as eating, sleeping, working - things that are always ignored in our ordinary life. I always discover and experience the nature of humanity at such time and from such things. What I want to experience in my art is survival, the physical body and the truth. My works reflected my living conditions at that time, which was a common condition of all ordinary people."

Looking back on those early, physically demanding pieces from 20 years or more ago, we wondered how Zhang Huan reconciled himself with them now and how his view of what the body represented has changed with the passing years.

"Naturally people will adopt corresponding ways to express their different ideas due to changing ages and living conditions. I do not like to repeat what I have done. I will continue to do performance art if new inspiration occurs. It is still an influential art form with so many great performance artists in the world.

My artworks can be considered as a whole piece through which I channel my outlook on life and the world. Nowadays I use various media and skills in my works, so the patterns of manifestation seem different from previous pieces. However, the kernel remains the same, because the DNA in me will not be changed."

Check out Body of Art, and Zhang Huan's own Contemporary Artist Series monograph, in the store now. 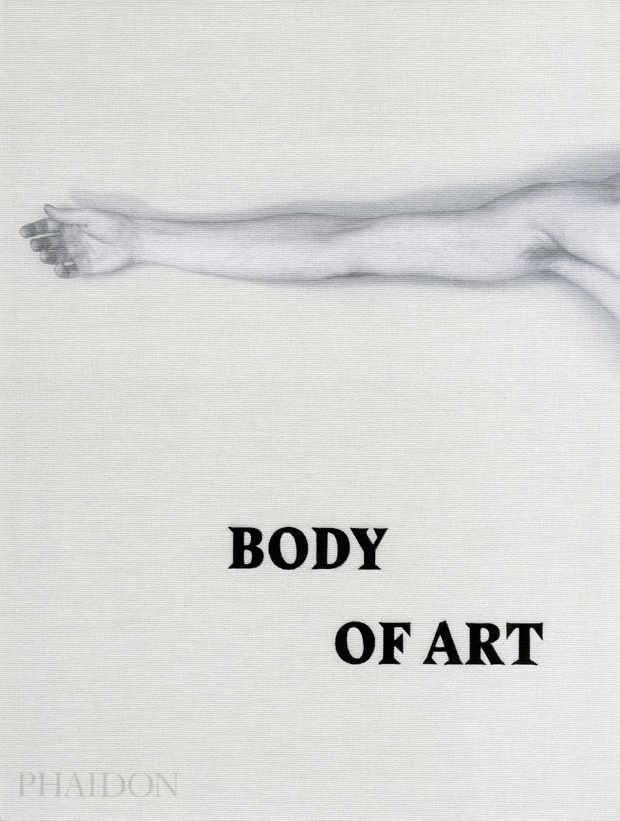