One of Warhol’s Death and Disaster paintings is coming up for sale, but do you know what it is about?

This 20th Century executioner’s tool may seem like an incongruous image for Warhol to alight on, especially viewed beside his jollier, better-known symbols of consumerism. Yet Electric Chair, a fine example of which goes up for auction at Christie’s Post-war and Contemporary Art Evening sale in New York tomorrow, 10 November, captures the morbid side of the great pop artist.

This particular example, Little Electric Chair, carries a $6-9m estimate, and belongs to one of the artist's most crucial and controversial series: The Death and Disaster works.

As we explain in the Absent Body chapter of our corporeal art survey, Body of Art, “In 1962 Andy Warhol began his ‘Death and Disaster’ paintings, based on newspaper images of public and private catastrophes: plane and car crashes, the devastation of the atomic bomb, race riots, poisonings and suicides.

“The following year, when the last two executions in New York State were carried out and capital punishment became a subject of fervent debate, Warhol added the electric chair to his gloomy catalogue. It became his most powerful icon.

"Over the next decade he created about 40 paintings, using the same source image – the chair in which the Soviet spies Julius and Ethel Rosenberg were executed in 1953. Although the pictures seem identical, no two are exactly alike. They are often configured differently, and the colours of their backgrounds vary from ominous reds and purples to pretty pastel hues. The chair itself is remarkably ordinary, apart from the clutter of trailing tubes and straps that dangle from its left arm. Positioned in the death chamber, it remains hauntingly unoccupied – a surrogate body with back, arms and legs, awaiting its next victim.” 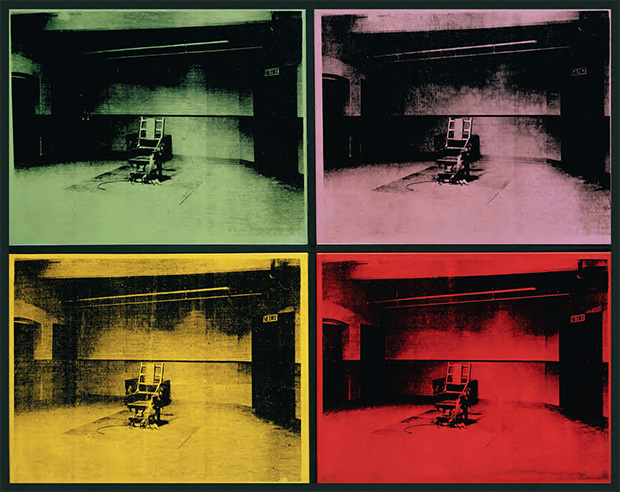 Four Electric Chairs (1964) by Andy Warhol. As reproduced in Body of Art

Christie's Little Electric Chair, created in 1964, may measure only 22 x 28 inches, or  55.9 x 71.1 cm, yet its date, subject matter and provenance – this one was bought originally from Warhol's gallery, Leo Castelli, in New York –  all indicate that this is prime pop, dating from a time when sex, death and commerce were still shaping Andy's vision.

If you are bidding on this piece, we would like to wish you good luck. To find out more about how this piece fits into other bodily artworks, order a copy of Body of Art here; and for deeper insight into Warhol, consider our wide variety of books, including the artist’s definitive catalogue raisonné.